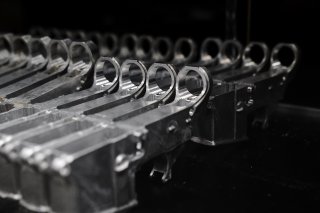 The anti-Joe Biden slogan “Let’s Go Brandon” has taken off in recent weeks. It’s become a go-to slogan for opponents of the resident.

The slogan began at a NASCAR race in October, according to CNN. Winning driver Brandon Brown was interviewed after the race by an NBC Sports reporter. The crowd was chanting “F— Joe Biden,” but the reporter interpreted the chant as “Let’s Go Brandon,” in reference to the winning driver.

The phrase caught on in the subsequent weeks. Republican politicians and conservative celebrities began using the phrase in public. In late October, an Associated Press reporter aboard a Southwest Airlines flight reported that the pilot had used the phrase over the plane’s public address system. Some have since speculated that the pilot may have said “Let’s go Braves” instead of “Brandon” in reference to the World Series being played hat week.

Now, even weapons and firearm accessories are being emblazoned with the refrain, according to NBC News. South Carolina-based Palmetto State Armory is accepting pre-orders for a “LETSGO-15 Stripped Lower Receiver,” for AR-15-type rifles.

“The ‘LETSGO-15’ lower comes from the most advanced aerospace manufacturing technology and is one of the industry’s finest forged, MIL-SPEC lowers,” the website says. “This PSA lower is made using our automated manufacturing process. Our multi-million-dollar engineering and manufacturing facilities allow us to produce a product of unequaled quality and value.”

Two other firms, Culper Precision and My Southern Tactical, are selling AR-15 magazines with “Let’s Go Brandon” images on the side.

The U.S. Secret Service declined NBC News’ request for comment about the trend.

Some have expressed outrage about the trend. Fred Guttenberg, a gun control activist whose child was killed in the Parkland school shooting in 2018, announced his disapproval on Twitter.

“There is nothing funny about this. This ought to lead to an immediate [FBI] investigation & arrests,” Guttenberg wrote. “The Supreme Court this week will hear arguments on the second amendment. This is just further proof of why we need laws to protect us from gun violence.”