Leyte Gulf: The Battle That Made the U.S. Navy the World's Most Dominant 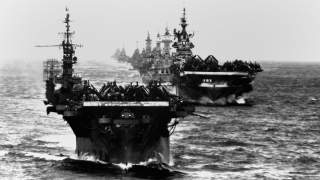 The Battle of Leyte Gulf left the Imperial Japanese Navy (IJN) almost utterly broken. Three battleships were lost, including the super-battleship HIJMS Musashi. Four aircraft carriers had been sunk, along with some ten cruisers and eleven destroyers. Exact numbers of Japanese losses are difficult to come by, because the battle gave free rein to US submarines and aircraft carriers to wreak havoc across the region. For example, the battleship HIJMS Kongo was lost to submarine attack three weeks after the battle, while relocating from Brunei to Japan. The rest of the IJN would struggle to reconstitute itself in any useful manner for the duration of the war, with many vessels sunk by U.S. carrier raids against bases in Japan. The battle dramatically curtailed the ability of Japan to resist the final Allied campaigns of the war.

Leyte Gulf did reveal one final Japanese weapon, however. Although both American and Japanese pilots had made suicide attacks (generally under extreme conditions) earlier in the war, Leyte Gulf saw the first organized efforts to use suicide aircraft for tactical effect. Not long after narrowly escaping Admiral Kurita’s Center Force, the escort carriers of Taffy 3 came under concerted attack from a unit of Japanese suicide planes. Most of the carriers were damaged in the attacks, with St. Lo succumbing after a direct hit from an A6M Zero. Although the attacks could not turn the tide of the battle, they offered an ominous harbinger of what the rest of the war would look like.

The Great What Ifs

Leyte Gulf is characterized by its great “what ifs,” generated by the complexity of the Japanese plan and the confused nature of the U.S. response. Unfortunately for the Japanese, the huge disparities in resources between the U.S. Navy and the IJN meant that almost any scenario would have led to the near utter destruction of the fleet.

What if Halsey had caught Kurita?

The answer to this question depends to a great extent on when Halsey would have caught Kurita, and with which ships. If the battleships of the Third Fleet had remained near the San Bernardino Strait, a night action very similar to that which ensued at Surigao Strait might have happened. Kurita’s force was, of course, considerably stronger than that of Nishimura, and his battleships could have inflicted severe damage on the Americans. If Halsey, as planned, had left only four battleships guarding the Strait, the odds would have been tight.

However, the Americans would still have enjoyed the benefit of better radar, and had not been battered by air attacks all day. While the Yamato was arguably the match (or even superior to) of the most powerful U.S. ships, the rest of the Japanese squadron was not. Kongo and Haruna, in particular, would have fared badly in direct combat against U.S. battleships, just as Kirishima struggled against USS Washington in 1942.

If Halsey had been quicker on the trigger to respond to the desperate pleas of Taffy 3, the entire weight of his battleship force might have fallen on the battered Kurita as the latter tried to escape through San Bernardino Strait. In this case, the disoriented and significantly damaged Japanese force would have stood little chance against the 16” guns of the U.S. Navy’s most modern battleships.

A more tactically interesting encounter might have ensued if only USS Iowa and USS New Jersey had engaged the Japanese. This would have left Kurita’s force with a notional tonnage advantage over the Americans, although the U.S. squadron still would have enjoyed advantages in radar and speed. HIJMS Yamato and HIJMS Nagato might well have inflicted some damage on the American ships, although probably at the cost of being caught by the rest of the U.S. battle squadron.

What if Kurita had destroyed the invasion fleet?

On the morning of October 24, it appeared that Kurita had the U.S. invasion fleet at his mercy. If the Americans had been less astonishingly lucky, the guns of the battleships and cruisers of Center Force might have quickly devastated Taffy 3, then potentially moved on to the other forces (including two additional squadrons of escort carriers) supporting the invasion. This could have disrupted the invasion and slowed the pace of advance, although it is unclear how much damage Kurita could have inflicted before the combination of Halsey’s and Oldendorf’s battle squadron squeezed him to death. Indeed, Oldendorf’s six older battleships almost certainly would have engaged Kurita first, and likely would have destroyed the greater portion of Center Force in a daylight battle. Halsey’s fast battleships would have picked up any stragglers. Overall, Japan would have been even more prostrate.

What if the IJN conserved itself for another battle?

After the Philippine Sea, the IJN was in dire shape. Unfortunately, American material advantages continued to compound themselves, as more battleships, carriers, cruisers, and destroyers joined the fleet on a daily basis. Even if the IJN had rejected the desperate bid to stop the invasion at Leyte, it would have found itself stuck in Japan and other points around the Pacific, bereft of fuel and generally helpless to resist carrier attacks. More ships (and certainly more sailors) would have survived until the surrender, but the IJN desperately wanted to avoid a scene like the 1918 surrender of the German High Seas Fleet at Scapa.

Japanese naval power was utterly devastated by the Battle of Leyte Gulf. Elements of the fleet fled south, west and north, each of which posed unfortunate problems. To the west and south, the fleet still had access to the oil resources of the Dutch East Indies, but lacked facilities for repairing the damage that many ships had taken. These ships had to contend with the battleships and carriers of the Royal Navy, then undertaking an offensive into the region. In Japan, the surviving warships of the IJN could be repaired, but the problem of fuel access had become dire.

In the event, many of the warships that survived the battle would never return to useful service. Some, including HIJMS Yamato, were destroyed in the defense of Okinawa. Others were sunk in port by the great carrier raids of the last months of the war. A few survived in Japan, Singapore, and elsewhere until the surrender.

Leyte Gulf destroyed one of the world’s three great navies. Since that time, the U.S. Navy has enjoyed presumptive dominance around the world. The ships that fought at Leyte Gulf are almost all gone (four of Halsey’s battleships remain, along with the aircraft carriers Lexington and Intrepid), but the U.S. Navy has rebuilt itself and rebuilt itself again, in always in anticipation of some future clash. Whether the aircraft carrier will remain the arbiter of the next great naval battle remains an open question.