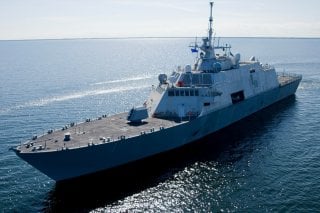 The Navy’s troubled Freedom-class Littoral Combat Ships are slated for a class-wide repair following the successful validation on one ship of the class.

The Navy’s Littoral Combat Ships have been plagued with problems—everything from engine seawater ingestion, unchecked corrosion, and most recently, combining gear malfunctions.

The Freedom-class is unique in that the ship can achieve very high top speeds—up to forty-seven knots—using a pair of diesel engines and gas turbines. However, the combining gears linking those two propulsion systems are complex—and prone to breakdown. As a result, an estimated thirteen ships need their combining gears repaired.

So significant is the problem that the U.S. Navy stopped taking delivery ships until the manufacturer fixed the issue.

“We held industry’s feet to the fire… We stopped delivery of these ships until we got this right. Reliability of LCS is our number one priority with respect to that ship class,” Chief of Naval Operations Adm. Mike Gilday said to reporters.

“We really forced industry to go back to the drawing board with respect to the fidelity of the engineering work to do significant and rigorous shore side testing before we approve that final design that actually just got installed in the first ship.”

The first ship to undergo the repair, the USS Minneapolis-St. Paul highlighted just how complicated the repair is. Earlier this summer, an LCS Deputy Program Manager explained that “it’s a very complex fix to replace the bearings on the combining gear. It’s a very tight space, there’s a lot of interferences that have to be removed.”

It remains unclear how the rest of the Navy’s Freedom-class fleet will be repaired, though some not yet delivered to the Navy will require retrofitting. The first two of the class—already retired—were built using different combining gears that did not fail, while the last of the class will be built with the correct components.

Though it has been a long a problematic journey for the U.S. Navy’s Freedom-class ships, a solution might be around the corner—and not a moment too soon. Admiral Gilday explained to USNI News that the Navy’s “intent is to scale the LCS around the globe and to get as much as we can out of that platform,” he said. “We’re back fitting those ships with some significant weapon systems.”