Lindsey Graham: 'I Hope Carter Page...Sues the Hell out of the Department of Justice and the FBI' 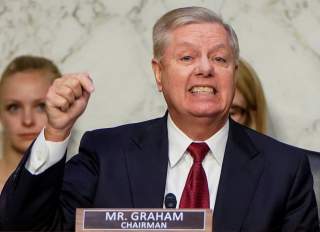 Republican South Carolina Sen. Lindsey Graham said Wednesday he hopes that Carter Page “sues the hell” out of the FBI and Justice Department for relying on the unverified Steele dossier to obtain surveillance warrants against the former Trump campaign aide.

Graham was speaking at the opening of a Senate Judiciary Committee hearing to go over a Justice Department inspector general’s report that found the FBI misled the Foreign Intelligence Surveillance Court in order to obtain spy warrants on Page.

But the inspector general’s office found evidence that raised questions about both Steele’s credibility and the reliability of the ex-spy’s dossier sources.

Graham highlighted those aspects of the report and questioned why the FBI did not re-evaluate its investigation of Page after receiving information that undercut the dossier.

“I hope Carter Page gets a lawyer and sues the hell out of the Department of Justice and the FBI,” said Graham.

Page has unsuccessfully sued the Justice Department over the surveillance against him. He suggested in an interview on MSNBC on Tuesday that he is exploring his legal options in the wake of the release of the inspector general’s report.