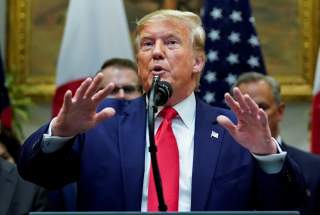 My memories of civil war in west Baghdad in 2006 were brought to the forefront of my mind after I read a story about how First Baptist Dallas Pastor Robert Jeffress had opined that if President Donald Trump were to be impeached by Congress, then it would “cause a civil war like fracture from which this country will never heal.”

Twelve years ago, in August 2007, the Washington Post published an op-ed I wrote titled “In the Middle of a Civil War.” I wrote it just eight months after my return from Baghdad. In 2006 I commanded a combat battalion as a part of the U.S. Army’s 4th Infantry Division in west Baghdad during the height of the Shia-Sunni civil war.

I and the soldiers in my command witnessed first-hand what a civil war does to a society, its institutions, and the people and soldiers who fight it.

To be blunt, it is not a pretty thing to see or be a part of.

The great U.S. Union general during the American Civil War, William Techumseh Sherman, observed that war “is cruelty, and you cannot refine it.”

The U.S. invasion of Iraq in 2003 (which I also participated in as a U.S. Army Brigade Combat Team Executive Officer in the 4th Infantry Division) broke the Iraqi regime and destroyed Iraq’s major institutions and unleashed a level of sectarian violence between Iraqi Shia and Sunni that grew over time.

That sectarian violence reached a crescendo of cruelty, death and destruction in Baghdad in 2006.

In the Sunni district of Amriyah in west Baghdad for which I and my battalion had operational responsibility in 2006, the Shia-Sunni civil war saw mass suicide bombings, torture chambers, kidnapping, execution, and other violence.

There were no bounds or rules to where the violence would be directed, innocent children and families perished. And of course, the U.S. fighting men and women were caught in the middle of it, frustratingly trying to slow the mayhem, all the while suffering casualties themselves.

This got me thinking more about my experience in the middle of a civil war in 2006 and wondering why anyone would want to suggest that it might come about in America if the President were to be impeached.

There is this scene from Amryiah that has seared itself into my memory:

In October 2006, my patrol came upon a scene I keep trying to forget. A man was lying on the street; his wife, who had blood running down her face, stood nearby crying as she clutched their baby. The child in her arms was dead, shot in the head, as the father had been. The man, who was a Sunni, and his child were killed by Sunni insurgents or local Sunnis—sometimes it was hard to tell them apart—because he had married a Shiite woman.

This is just one of the many examples I witnessed of the unleashed cruelty imposed on a society by a civil war.

So please, for those understandably engaged with the intense debate over whether or not the president should be impeached, please do not suggest that impeachment would result in civil war in our country. In particular, do not irresponsibly suggest it as a method to solve current political problems. There are peaceful means available for us as Americans to follow in order to solve the problems at hand.

Gian Gentile is a senior historian at the nonprofit, nonpartisan RAND Corporation. He served 28 years on active commissioned service in the U.S. Army.