Live Hand Grenades Keep Turning Up in the Strangest Places 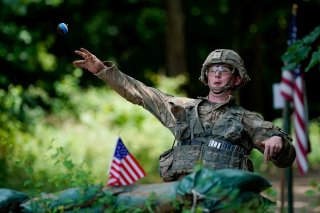 A general rule of firearm safety is to treat every gun as if it is loaded, even if you are absolutely certain it isn't. That bit of common sense doesn't always trickle down to ordnance, notably hand grenades – which explains why hardly a week goes by without someone finding a seemingly "live" grenade.

Unlike unexploded bombs, which continue to be dug up by construction workers across Europe and Asia, hand grenades are often found in basements, garages and even the occasional flea market.

One problem is that for even law enforcement officials it is very difficult to tell if a hand grenade is live or has been deactivated. These items have been sold for years as trinkets at gun shows, gun shops and even online. In most states owning a deactivated grenade isn't an issue (but always check with local officials before buying one), but these should never be taken out in public.

When such items are encountered it can cause confusion.

Such was the case when a man in Murfreesboro, Tenn. found a "military training hand grenade" on his front yard while mowing the lawn. The Tennessee Highway Patrol Bomb Squad arrived and quickly determined it wasn't a live grenade.

A resident of Owensboro, Kentucky shared a similar story when his lawn tiller unearthed what was believed to be a live grenade. The Daviess County Sheriff’s Office (DCSO) responded and quickly sent photos to the Owensboro Police Department's Bomb Techs, who determined it was a potentially live grenade. How a "live" grenade ended up in someone's yard isn't clear, but often people don't know what is actually live or is in fact inert.

That was the case for an Oregon woman, who found a World War II-era hand grenade it in its original cardboard packaging among her deceased father's positions. The Lincoln County Sheriff's Office deputies were skeptical that it was live but concerned enough that the Oregon State Police Explosive was called out and it wasn't the first time the unit had to investigate such findings.

Last fall four hand grenades, three of which experts determined to be live, were found near a fast-food restaurant of Grants Pass. How or why the items were left there isn't known, but it serves as a reminder that if someone is uncertain they should always check with authorities. In North Carolina, a 9-year-old actually reeled in a true "catch of the day" while using his magnetic fishing set. He recovered an unexploded hand grenade that someone may have disposed of in the creek.

Perhaps the most surprising place to find an unexploded hand grenade came this month when a man in Beaulieu, Hants, England found a World War I German hand grenade – likely a souvenir from the war – in his home's gutters! English authorities determined the grenade was still live and disposed of it properly. As with most of the grenades that people keep finding, it is unclear how it arrived in that location.