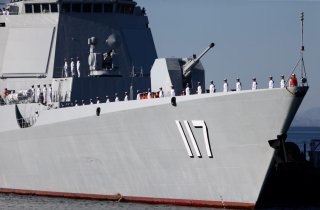 Last week, a large group of Chinese warships had been encircling Taiwan and patrolling the East China Sea while conducting war preparation exercises and live-fire drills in the Philippine Sea.

The carrier group was heavily armed and quite large, consisting of China’s Liaoning aircraft carrier, a new semi-stealthy Type 055 destroyer, three Type 052D destroyers, a Type O52C destroyer, a Type 054A Frigate, and a Type 901 supply ship. The war exercises spanned a period of four to five days and included what the Chinese government-backed Global Times newspaper identified as “cross-day-and-night carrier-based aircraft training with live munitions just east of Taiwan.

“With the carrier group to Taiwan's east, the PLA [People’s Liberation Army] also reportedly dispatched an increased number of different types of warplanes and additional warships from the Chinese mainland west of the island of Taiwan, effectively surrounding and enclosing the island under the watch of US and Japanese aircraft carriers,” the Global Times reports.

The concept of the exercise, as described by the paper, was to attempt to discourage or prevent the United States, Japan, and their allies from intervening in the event that the PLA tries to reunify with Taiwan by force.

There is also an interesting tactical dimension to the story, as the Chinese paper quotes an expert saying additional platforms such as airplanes and support ships were added to the carrier group to strengthen its multi-domain capacity. This appears to be somewhat of a transparent attempt to replicate or keep pace with the Pentagon’s multi-domain task forces now training in the Pacific theater.

“By moving in tandem with aerial and maritime forces from the Chinese mainland, the carrier group could completely cut off the routes foreign forces may take if they militarily interfere with the Taiwan question, and this will bring significant advantages to the PLA,” the paper writes, quoting a Chinese expert.

A variety of aircraft were used in support of the exercise to encircle and intimidate Taiwan, including H-6 bombers, J-11 and J-16 fighter jets, as well as KJ-500 early warning surveillance aircraft. The effort was also supported by Ka-28 anti-submarine helicopters.

This movement highlights the PLA’s interest “massing” multi-domain combat power to prepare for war and send an intimidating message to Taiwan. Given how close Taiwan is to mainland China, Chinese military forces do have the opportunity to reinforce their attacking maritime forces with fighter jets launched from land within mainland China. Potentially, China’s fifth-generation J-20 stealth fighter could even offer support during an amphibious assault. This would compensate for China’s lack of sea-launched fifth-generation aircraft.

To counter this aggressive display of power, both U.S. and Japanese carrier groups are also operating in the Philippine Sea.