LMXT: The New Lockheed Tanker That Could Create Problems for China 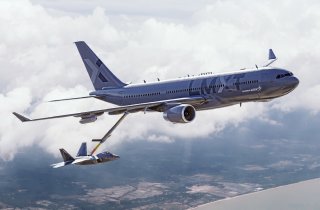 They may not command the attention of stealth fighter jets, nuclear-armed submarines or the latest in armored vehicle innovations, yet aerial refueling tankers could prove to be impactful albeit a lesser recognized reason for victory in war.

This is particularly true in areas such as the Pacific region, where range, power projection and combat mission reach would be stressed in potentially unprecedented ways. In any kind of major engagement with China, for instance, effective tankers could more than double the range of carrier-launched fighter jets such as F-35C fighter jets and F/A-18 Hornets.

Perhaps these are some of the reasons why the Air Force is moving quickly to deploy a near-term “bridge” tanker to support operations until sufficient numbers of the KC-46 Pegasus can arrive. The program, called the KC-Y Bridge Tanker program, seeks to militarize the latest in commercial innovation for maritime and land combat missions. It might not even be a stretch to see tankers as a primary reason why the United States could prevail against China’s growing arsenal of long-range “carrier-killer” missiles.

The primary aim of the Bridge Tanker program is to begin replacing the aging KC-135 Stratotankers which are now nearing the end of their service life. The KC-135 Stratotankers will be seventy years old when the Air Force receives its last planned KC-46A Pegasus in 2029, according to Jane’s Defense.

The move suggests an Air Force interest in nearer-term readiness, as a fast-produced, commercially derived Bridge Tanker would be available to conduct operations much sooner than the full expected force of KC-46A Pegasus transport aircraft.

There is one option developed by Lockheed Martin called the LMXT, which was designed to out-perform the KC-46 Pegasus, developers say. Its design is based on the Airbus Multirole tanker A330 MRTT aircraft, which is in service with thirteen key allies and includes a boom/drogue refueling system, fly-by-wire automatic boom/air-to-air refueling systems and advanced sensor cameras. Company information states that “at 2,000 nautical miles from its departing base the LMXT can offload 60% more fuel than the KC-46A and at 3,000 nautical miles the gap grows to more than 150-percent.” Lockheed Martin advocates for the aircraft add that the LMXT has more fuel capacity than the KC-46 Pegasus and can operate from far more airfields in the Pacific region than the KC-46 Pegasus. This could be critical, given the maritime expanse of the Pacific region and the amount of distance separating various tanker launch points on land.

Military officials could pair the LMXT with a carrier-launched F-35C fighter jet to attack Chinese coastal and mainland areas from a safer stand-off distance. An F-35C jet has a reported combat radius of roughly five hundred to six hundred miles, meaning that is how far it can travel without refueling before needing to turn around. When refueled by an LMXT, however, the stealth fighter jet could conduct effective combat operations from as far as one thousand miles or more offshore. This would put it out of reach of some of the highly-touted Chinese anti-ship missiles, such as the Dong-Feng-21D. The DF-21D can travel ranges out to nine hundred miles, according to numerous reports and statements in the Chinese media. That means an F-35C fighter jet might need to launch too far away to reach inland targets unless it was refueled mid-flight by an LMXT.

Secondly, an LMXT could support more dispersed, yet networked missions wherein a disaggregated group of F-35 jets could cover wide swaths of territory by virtue of operating with double the range due to refueling. Such a dynamic would optimize the networking and intelligence, surveillance, and reconnaissance (ISR) potential of interconnected F-35 jets and make it possible for them to extend the range which they can attack. The dwell time of the jets is critical to this ability too. A refueled F-35 will be positioned to spend much more time over target areas when responding to new intelligence information, enemy movements or changing target data. More time in the air, enabled by the LMXT, could prove decisive in any military campaign.

In the event of a war contingency in the Pacific region, perhaps several LMXTs could be based in Japan and to support F-35 jets transiting toward the Chinese coastline for an amphibious attack. Perhaps LMXTs based in Guam or at allied airfields throughout various parts of Southeast Asia could pose a threat to Chinese forces from twice the distance. This would send China a message that its ballistic missile launchers, some of which are known to be road-mobile, could be vulnerable to stealth fighter attacks from great distances.

As part of this equation, the question of survivability always comes up when strategists discuss the tactical attributes and limitations of larger, less stealthy fixed-wing tanker aircraft. Interestingly, there is a way to offset this increased vulnerability and improve tankers’ ability to function effectively in high-threat environments. A 2016 study in the Air Force Institute of Technology, titled Effectiveness Based Design of a Tactical Tanker Aircraft, explains that tanker mission range and scope can be massively extended in high-risk areas by “defensive counterair combat patrols.”

“Fighter aircraft are assigned to fly defensive counterair combat air patrols on High Value Airborne Asset (HVAA) sorties to protect tankers, airborne radar, and surveillance aircraft. The objective of an HVAA sortie is to intercept or destroy enemy attempts to attack the high-value asset,” according to the research paper.

If more fighter jets can stay in the air by virtue of being refueled, then several of them could protect the LMXT as it operates in higher-threat areas.

These kinds of protections would be key in a Pacific engagement given that potential enemies like China have sensors, drones, weapons, and space assets with longer ranges they could draw upon to deny U.S. forces access to its coastline. Additional reach enabled by the tanker aircraft could enable cargo planes to deliver supplies, ammunition, or troops over much greater distances and F-35 jets could leverage their ISR and networking capabilities across a wide combat area.

Perhaps Lockheed Martin’s LMXT, which is based on an Airbus airframe, could become a longer-term option for the Air Force given that sensors, avionics, communications technology, and even refueling systems can be upgraded by software in coming years.