LMXT: A New Tanker for the U.S. Military to Fight At Longer Ranges 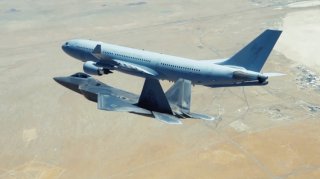 The Air Force is strengthening and expanding its tankers fleet with its new KC-Y effort in a clear effort to expand combat reach and functionality for fighter jets, bombers, and other vital assets in need of flying long missions.

This need is quite pressing and self-evident, given the increasing range of enemy weapons and sensors. The Air Force also seems to have an interest in expanding the combat functionality and mission scope of its tanker fleet by architecting platforms with sensors, command and control systems, high-speed computing, and electronics sufficient to offer a major contribution to multi-domain “networking.” No longer will tankers merely operate with the somewhat narrow mission scope of refueling. While refueling remains a crucial and primary function, a fixed-wing aircraft developed for the KC-Y program is also intended to greatly support the Pentagon’s well-known high-priority Joint All Domain Command and Control (JADC2) program.

This effort seeks to enable a multi-domain force wherein major combat platforms, drones, ground weapons, and virtually all combat systems no longer operate within narrowly defined concepts of operation but rather function as “network nodes” connecting the entire force in real-time.  Such an “information warfare,” and “sensor-to-shooter” time focus, designed to link surface ships with fighter jets and even armored vehicles on the ground, represents the conceptual, strategic, and tactical backbone of the Pentagon’s effort to retain global superiority amid an extremely serious threat environment.

It is with this in mind that major industry players such as Lockheed Martin are engineering and offering KC-Y contenders such as the LMXT, an upgraded and further militarized variant of the Airbus A330 MRTT. The aircraft is in service with thirteen key allies and includes a boom/drogue refueling system, fly-by-wire automatic boom/air-to-air refueling systems, and advanced sensor cameras.  Lockheed Martin developers say if can offload as much as sixty percent more fuel than a KC-46A and grows that gap to 150 percent at 3,000 nautical miles.

The tanking functions of the new offering appear quite solid, it would seem, yet Lockheed Martin has also made a commensurate and high-priority effort to engineer its LMXT to support the Pentagon’s JADC2 effort through open architecture, common technical standards and a modular approach to development.

In this way, operating a tanker as both a refueler and combat “node” introduces a new reality of tactical advantages the LMXT can offer.

A Lockheed Martin statement explains the newly offered platform as “a multi-domain operations node that connects the LMXT to the larger battlespace, increasing onboard situational awareness to provide resilient communications and datalinks for assets across the force.”

Such a prospect can allow commanders to envision an expanded mission scope for the new tanker, as it could use secure, hardened datalinks to send and receive or relay time-sensitive combat data in real time. Perhaps a fighter jet wants to send newly discovered targeting coordinates to a ship or ground platform leveraging the command and control and processing ability aboard the tanker? This could not only greatly extend mission reach but also contribute to evolving attack missions.