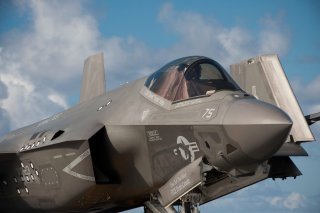 The system, called Operational Data Integrated Network (ODIN), was developed as a follow-on or improvement upgrade to the F-35’s Autonomic Logistics Information System (ALIS). ODIN is slated to be fully operational by 2022, a Lockheed statement said.

A statement from the Pentagon’s F-35 Joint Program Office explained that the initial phase of the deployment of the ODIN computer hardware, known as the ODIN Base Kit, has now replaced all first-generation unclassified Autonomic Logistics Information System, or ALIS.

The new ODIN hardware is 75 percent smaller and lighter than previous hardware and was procured at nearly 30 percent lower cost.

This kind of high-speed, diagnostic computer system performs a number of critical functions, one of which is condition-based maintenance wherein onboard sensors and computers monitor flight systems such as engine rotations or cooling functions. In addition, ODIN will examine the component health of onboard software and hardware throughout the aircraft such as avionics and other electronics. This will anticipate potential failures well before there is any kind of malfunction to both preserve the safety and survivability of the aircraft and also streamline the repair and maintenance process by getting ahead of the curve. Most of all, this diagnostic or predictive computer system can mitigate the risk of in-flight malfunctions which could introduce substantial performance, functionality, and even tactical complications and problems.

A write-up from the Pentagon’s F-35 Joint Program Office details some of the new computer technologies woven into the ODIN system. While it will perform many of the logistical functions similar to its ALIS predecessor, it will also bring more securing and massively increase information processing speeds.

ODIN is not likely to be restricted to purely maintenance functions but may also play a vital role in aircraft information processing, management, and transmission. The F-35 fighter is incorporating a number of emerging artificial intelligence systems, meaning its sensor fusion applications began as mere concepts years ago. Now otherwise disparate pools or streams of information such as targeting data, navigational details, threat data, weather conditions, and basic flight trajectory information can all be gathered, analyzed, organized, and presented on a single screen to F-35 pilots.