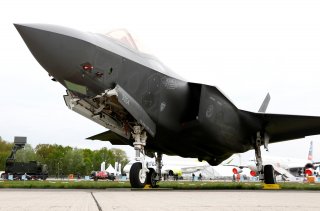 The Lockheed Martin F-35 Joint Strike Fighter jet has been described as the world's most dominant multirole fighter in the world, but in 2020 the fifth-generation stealth aircraft met a match no one expected.

That was the coronavirus.

Due to pandemic-related slowdowns, the aircraft's maker Lockheed Martin has announced that it now expects to deliver just 122 F-35 jets this calendar year—twenty fewer than expected. However, the defense contractor isn't hitting the afterburners and going full throttle to make up the shortfall, but instead will play a long game so as to avoid surging and then slowing production on the line.

Doing so could increase the costs—and the F-35 jet has been in the spotlight already for its high costs. The life of the program is expected to end up costing well over $1.5 trillion, but that is for an aircraft that will be flying well into the 2070s.

The plan now is for Lockheed Martin to deliver the delayed jets over the next two years, and stick with producing about eleven aircraft per month, which the company said would make the most sense in terms of capability and cost.

“It’s actually going to take us a couple of years to recover those twenty jets,” said Michele Evans, executive vice president for aeronautics at Lockheed Martin, an interview with Air Force Magazine last week. “What we don't want to do is drive our capacity way up.”

Doing so to make up for the shortfall and them ramping down wouldn't be cost-effective or efficient in the long run, and Evans said it would create “spikes and low point.”

Defense contractors are all about steady and consistent.

It is also quite clear that while some customers may have to wait a little longer to receive their F-35 jets, the delays may not have impacted Lockheed Martin’s bottom line. The company booked almost $6 billion in contracts in August, but those were mostly driven by contracts for the older F-16 aircraft, reported Seeking Alpha, which tracked the defense contractor’s recent business transaction.

The F-16 jet, which remains in service with more than twenty-five countries, is the world's most successful, combat-proven multirole fighter jet ever produced.

Business Not as Usual

The coronavirus pandemic has seriously disrupted the aerospace industry, but as Air Force Magazine also highlighted, Lockheed was able to keep significant funds flowing to its supplier base to keep small enterprises in business. It had also developed an overall package addressing its coronavirus-related costs.

The firm is also working with the Pentagon towards what Evans described as a “global settlement” regarding those coronavirus-related costs incurred by the defense industrial base. That number is somewhere between $10 and $20 billion in relief, but it could still take five or six months for companies to see the money.

Despite the slowdown from the coronavirus, Lockheed Martin could be having what can only be described as a very strong year and an even stronger third quarter. That even comes as the British government suggested it might cut its order of the F-35 jets by half—but given the backlog that might not be all bad news for Lockheed at this point.