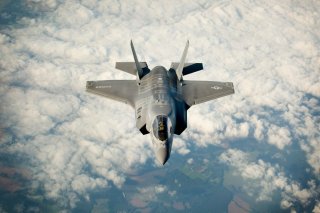 While the Polish Air Force won't receive its first F-35A Lightning II jet fighters until 2024, this week it was announced that those aircraft could have quite a unique “wingman.” According to multiple reports Poland will not only acquire 32 of the fifth generation stealth fighters under a deal signed in January, but the aircraft's manufacturer, Lockheed Martin, would also supply the Polish military with long-range drones to enhance the operational capabilities of the F-35.

“Both the U.S. and Poland are interested in a next-generation UAS capability,” Jack O’Banion, vice president for strategy and customer requirements at Lockheed Martin’s Skunk Works division, said at a press briefing ahead of the MSPO defense industry show, as reported by DefenseNews.

“We've seen the Polish Ministry of Defence’s Technical Modernization Plan, which was released last year, which outlines the UAS need,” added O'Banion, who also said that the company saw “a significant overlap” between the U.S. and Polish tactical requirements for the drones.

Poland will begin to receive its F-35s in 2024 in a $4.6 billion contract that will allow the NATO member and former member of the Warsaw Pact to replace its antiquated Soviet-designed Sukhoi Sui-22 and Mikoyan MiG-29 aircraft. The Polish Air Force has already acquired 48 F-16 C/D block 52+ jet aircraft.

By making the decision to buy the F-35, Poland will be able to leap ahead of a number of its European allies, most notably France and Germany, and enter the elite group of countries operating fifth- generation aircraft. As more NATO members adopt the aircraft, the F-35 will constitute NATO’s single biggest fighter fleet, ahead of the Franco-German-British Eurofighter. That could provide a major boost to air power interoperability for the Alliance.

The U.S. Air Force has been exploring ways that the F-35 and F-15EX fighter jets could operate with a low-cost XQ-58 Valkyrie drone, an unmanned platform developed by Kratos Defense. It is part of a wider Air Force effort to acquire fast, stealthy, armed drones that can fly and fight alongside manned fighters such as the F-35. The Air Force has been in discussions with Boeing and Lockheed respectively to modify their F-15EX and F-35A Block 4 fighters to accommodate the datalinks and processors from the Skyborg effort.

At a few million dollars each, the drones would be fairly inexpensive compared to the cost of the F-35A or F-15EX. Advances in artificial intelligence (AI) could allow these drones to serve as “loyal wingmen” to the advanced fighters and provide an extra set of eyes for the human pilot.

This could speed up targeting and tactical input during reconnaissance missions in the vicinity of where a fighter pilot might want to attack.

The other advantage a drone could offer is to allow for better connectivity between the U.S. Air Force's most advanced aircraft. Its two stealth-fighter types, the F-22 Raptor and F-35 Joint Strike Fighter, can't exchange data between them. Both fighters feature their own, unique data-link for secure information-sharing, but a drone such as the XQ-58 could fly in a mixed formation of F-22s and F-35s, functioning as a data gateway between the two types. The Air Force called the concept ‘GatewayOne,’ and announced plans to test it last year.