Look Hard: This Might Be How China Tries to Sink the U.S. Navy 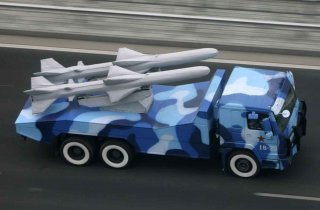 China’s military successfully executed a coordinated test launch of its top anti-ship ballistic missile into the South China Sea last August, according to Adm. Phil Davidson, the commander of the U.S. Indo-Pacific Command.

“These mid-range, anti-ship ballistic missiles are capable of attacking aircraft carriers in the western Pacific,” he told the Senate Armed Services Committee this week.

“Their employment during a large-scale PLA exercise demonstrates the PLA’s focus on countering any potential third-party intervention during a regional crisis.”

The U.S. military was able to identify the missile tested as the DF-21D, which is believed to be highly important to China’s strategy of deterring any military action off its eastern coast.

The Pentagon has said that the missile boasts a range greater than 930 miles.

The four-star admiral added that the use of the missile—even though it was in a drill—could be seen as a watershed achievement for the People’s Liberation Army.

“Notably, the PRC is not merely developing advanced weapons systems but is increasingly employing them in training and exercise scenarios to hone PLA warfighting skills and send an unmistakable message to regional and global audiences,” Davidson noted.

He acknowledged that after reviewing recent developments in the South China Sea, China “continues to militarize the region, deploying new equipment to its artificial outposts in 2020 and using forward airfields to support a growing level of military operations by heavy transport, intelligence, and anti-submarine aircraft.”

Beijing also conducts large-scale military exercises there, “with an emphasis on amphibious landing, joint fires, and maritime strike scenarios.” They “are augmented by an armada of China Coast Guard ships, fishing boats, and other para-military forces that serve as force multipliers,” Davidson added.

“These actions—which are inconsistent with President Xi Jinping’s and Defense Minister Wei Fenghe’s assurances that the PRC would not militarize the SCS—threaten our allies and partners’ autonomy, jeopardize freedoms of navigation, overflight and other lawful uses of the sea, and compromise regional peace and stability,” he said.

In another sign of escalation in the contested region, President Joe Biden’s administration recently brushed off a new warning from China that demanded that it change its policy toward the island nation of Taiwan.

China’s Foreign Minister Wang Yi has been quoted as saying that Washington needs to make genuine efforts to roll back what he termed the Donald Trump administration’s “dangerous practice” of overtly displaying support for Taiwan. He added that Beijing absolutely has “no room for compromise” on the matter.

When asked about the United States’ ability to deter a Chinese attack on Taiwan, Davidson said: “Our conventional deterrent is eroding in the region and it’s because of the vast advances that the Chinese have undertaken.”