Look Out Russia, The U.S. Army's M-1A2C Abrams Tanks Are Getting An Upgrade 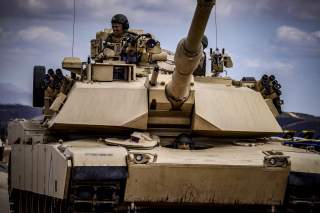 Key point: This staple of American ground force has been around since the 1970s.

The U.S. Army’s newest tank in the summer of 2019 should enter service with the first large unit to use the type.

“We’re in the throes of getting that together,” Hank Kennedy, a manager at General Dynamics’ tank plant in Lima Ohio, told Lima News.

The M-1A2C is the latest variant of Abrams to enter production. Congress in 2019 gave the Army $1.5 billion to buy 135 M-1s from General Dynamics, extending a program that began in the 1970s.

The Army’s budget proposal for 2020 asks for 174 new and upgraded tanks.

There are a bewildering number of subvariants of the M-1A1, each boasting incremental improvements in drive-train, armor and electronics. The latest upgrade, the M-1A1SA, has a factory-fresh engine, digital electronics and a top-secret armor blend that includes a thin layer of uranium.

"The Abrams M-1A2C can host any mature technology the Army deems operationally relevant," the Army stated.

The latest version of the M-1 arguably is the best tank in the world. For now.

Russia and China both are developing new fighting vehicles. Russia's high-tech Armata tank has run into development problems. China successfully has fielded hundreds of new Type 99A tanks that roughly are similar to mid-generation, digital M-1s.