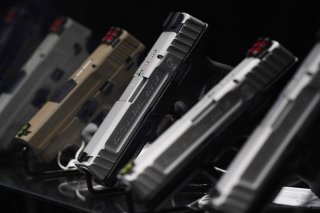 The Los Angeles County District Attorney's office is taking a unique approach in its gun control efforts—one that could be seen as a significant overreach. The County District Attorney is now calling on credit card companies to halt any payments for online purchases of so-called "ghost guns," which are DIY homemade firearms that use an unfinished receiver.

Gun control advocates, including President Joe Biden, have alleged that the kits—which can be untraceable—are being used in crime at a growing rate.

"American Express, Mastercard and Visa have the ability to go beyond what any law enforcement agency, legislature or city council can accomplish," Gascón said in a news release. "We are asking these companies to join us in stemming the flow of ghost guns into our communities by preventing a ghost gun kit from being sold with a few mere clicks on a smartphone or computer."

Gascón was joined by Los Angeles Police Chief Michel Moore and San Gabriel Police Chief Gene Harris, who is president of the Los Angeles County Police Chiefs' Association, in calling for the credit card companies to halt the online transactions of the kits.

Last year, the city of Los Angeles sued Polymer80, a Nevada-based manufacturer of unfinished receivers, after the LAPD had reportedly recovered more than 700 ghost guns that used parts from the seller.

In addition, the San Francisco district attorney's office announced that it would sue three California companies that make and distribute so-called "ghost guns," maintaining that the DIY firearms have been responsible for nearly half of the firearms recovered in gun-related killings in the city last year.

Ghost Guns in the Cross Hairs

President Biden called for a ban on ghost guns in April 2021 and threatened executive action if lawmakers failed to act.

However, as the Heritage Foundation reported last year, the power to make and change laws regarding firearms—including whether the Bureau of Alcohol, Tobacco, Firearms and Explosives (ATF) should regulate the 80 percent receivers and kits as fully functional firearms—lies with Congress.

The issue at hand is that federal law doesn't regulate the manufacture and sale of every firearm part. And it was the ATF that created the very rules that defined the frame or receiver as "the part of a firearm which provides housing for the hammer, bolt or breechblock and firing mechanism, and which is usually threaded at its forward portion to receive the barrel."

It would seem that Gascón—as with many supporters of gun control—is unhappy with the current laws. Yet, instead of trying to enforce those laws already on the books, or working to change the law, he's instead calling for those who process the payment to create a de facto ban instead.

Even if successful, this likely could do little to stop the proliferation of homemade firearms.

Thanks to 3D printing and online tutorials—as well as a growing cottage industry of parts makers—homemade guns have become far more commonplace in recent years. While it may even be true that some of the firearms are being made by criminals, the fact remains that stopping the processing of credit card payments is unlikely to deter illegal production. In addition, criminals have shown that they'll always find another way to arm themselves.