Lots of Missiles: The Marine Corps Has a New Strategy to Beat China 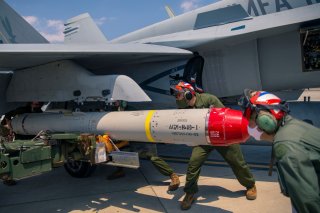 The Marine Corps is fast pursuing a new highly mobile, multi-domain, and heavily armed amphibious attack force. It will be able to hop from ship to shore between islands and transition ship-based over-the-horizon missiles to land as ground-fired anti-ship weapons.

This kind of tactical dynamic, which would apply to littoral land-sea island strips such as those in the South China Sea, is likely emerging due to the decided recognition that adversaries operate with advanced weapons and platforms capable of threatening amphibious forces in previously unprecedented ways. Additionally, these kinds of threat scenarios likely formed the conceptual foundation for the Marine Corp’s emerging Light Amphibious Warship (LAW), a now-in-development platform intended to pick up and transport Marines and weapons in an agile, fast, multi-domain, and expeditionary way. Members of Congress are showing great interest in the development of this new Marine Corps platform, given the current threat environment and the prospect of adding additional “over the horizon” attack options.

“The Marine Corps has a very good operational concept about how the Light Amphibious Warship would work, especially as they are going to look at putting their units into formations that are dispersed throughout the Indo-Pacific armed with long-range strike capability, and anti-ship missiles,” Rep. Rob Wittman (R-VA), ranking member on the House Armed Services Committee Subcommittee on Seapower and Projection Forces, told The National Interest in an interview earlier this year.

Wittman’s reference to “anti-ship” missiles in the context of the emerging vessel intended to bring newer kinds of multi-domain, “island-hopping” expeditionary amphibious platforms such as LAW, may have been a specific reference to NSM and the kind of “sea control” envisioned by Navy and Marine Corps strategists.

“Access denial strategies are not a new defensive strategy; what makes access denial challenging on the modern battlefield is the dramatic improvement and proliferation of weapons capable of denying access to or freedom of action within an operational area,” the article writes. (Lt. Col. Michael Manning)

“Quite significantly, the article, called SEA CONTROL, “Feasible Acceptable, Suitable or Simply Imperative,” appears to recommend strategies which support the current Marine Corps adaptation of the NSM to a land-firing contingency. Operating within the conceptual position that “Sea Control” is entirely necessary, the statement suggests “investing in low-cost technology that extends the ranges of A2/AD capabilities.”

In this instance, the statement seems to not only suggest that enemy A2/AD efforts can both be challenged or defeated from a defensive combat position, but indicates that offensive forces could themselves employ A2/AD strategies to acquire the sought after “sea control” and prevent an enemy from operating within a particular area. A land-fired, yet sea-transportable NSM seems to be precisely the kind of weapon capable of pursuing this kind of multi-domain amphibious warfare strategy.

The statement bases its findings, at least in part, upon a historical analysis of Japanese Naval battles during the early 20th Century, something which may very well have incorporated a retrospective look at Iwo Jima. The author, Lt. Col. Manning, indicates that the research pointed to a decided recognition that “sea control of the maritime domain is possible.”

Therefore, it makes sense to view GBASM in the context of a weapon intended to help achieve this. It is a modern tactical adjustment intended to leverage modern long-range sensors, secure networking, and new expeditionary warfare platforms to find new, multi-domain uses for a tested ship-integrated weapon.