Lots of Missiles: The Only Way to Stand Any Chance If Russia Invaded the Baltics 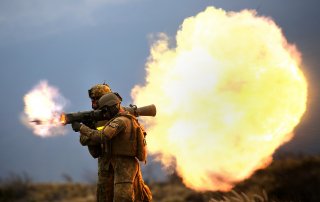 In Ukraine, the Kremlin was wary of sending in the armor in large numbers until it appeared separatist troops in the east neared defeat. At the same time, it’s also unclear how effective more Ukrainian tanks would have stopped it. It might be a better idea to buy missiles.

It was more than eight years ago when a tank force from the Georgian army’s 42nd Mechanized Infantry Battalion fought its way overnight through Tskhinvali, South Ossetia.

The tanks were in trouble. They were moving too fast, outrunning their infantry support and taking losses to South Ossetian irregulars scattered throughout the city. Only hours into a war which would last five days, they had to keep moving before Russian reinforcements could arrive to bolster the pro-Russian, breakway Georgian province.

Later in the day, the tanks arrived at a crossroads near the command center of a local detachment of Russian peacekeepers. And that’s when the full force of the Russian 19th Motor Rifle Division—rushed to reinforce Tskhinvali—slammed into the battalion.

The Russians quickly destroyed four of the Georgian tanks—not with tanks of their own, but with anti-tank guided missiles launched from lighter armored vehicles. Demoralized, the surviving Georgian armor retreated.

Fast forward to today, and the armed forces of the Baltic states are studying what happened during that battle, in the event they might one day find themselves in the same situation as Georgia. Namely, as small states with small armies colliding with a much bigger and much more heavily-armored one. And what they’re learning is that they need lots of anti-tank missiles.

“The Baltic States have integrated the lessons of the battle of Tskhinvali,” writes Frederic Labarre in a near-comprehensive history of the battle for Small Wars Journal. Labarre, a military analyst and former adviser to the Estonian Ministry of Defense, heavily based his account on interviews with Georgian commanders who fought in the war.

The past few years has seen the Baltic states of Estonia, Latvia and Lithuania buying up large amounts of anti-tank weapons and ammunition.

Earlier in October 2014, the U.S. approved the sale of $55 million worth of Javelin anti-tank missiles to Estonia. The sale includes a rather large number of 120 launchers and 250 missiles, including batteries and repair parts.

The Estonian military planned to buy the missiles before Russia invaded Crimea and eastern Ukraine, but the war certainly frightened Estonia enough into buying more of them—and doing it faster.

This is also just the latest Baltic anti-tank sale. In 2014 , the three Baltic states pooled more than $63 million to buy Carl Gustav rockets from Sweden.

Both the Javelin and Carl Gustav are very different weapons, but directed towards the same target. The Javelin is considerably more powerful, using a pattern-recognition computer to hurl infrared-sensing missiles high into the sky, before crashing back down onto the vulnerable top-sides of tanks. By contrast, the Carl Gustav propels rocket-propelled explosive rounds straight ahead at a velocity of up to 840 feet per second.

There’s one overriding reason for why the Baltic states want to destroy armor. It’s because they fear Russian tanks. Many officials in these countries are also worried NATO might not come to the rescue were Russian troops were to invade.

“The big difference is that Ukraine is not in NATO and we are,” Estonian Pres. Toomas Hendrik told the Washington Post in September. “This is about Article 5—if it ever fails, then NATO no longer works. Then no one trusts it.”

But the Baltic states are also looking back—at the first conventional war of the 21st century between Georgia and Russia. Georgia lost half its tank force of around 75 total committed tanks in the fighting. One stunning number is that by the end of the second day, Russia sent 120 T-72 tanks and around 300 BMP-3 and BTR-80 armored fighting vehicles into the fighting.

What’s also stunning, for all the armored beasts rolling around the battlefield, is that there’s no credible evidence to suggest any of them ever destroyed another tank.

“To recapitulate, most of the Russian-Georgian contact was composed of infantry engagements,” Labarre observes. “And most if not all tank destruction occurred at the hands of infantry and air strikes, the latter after the tanks had been abandoned.”

The heavy tank losses and paucity of defenses against Russian armor led to some desperate tactics, such as throwing grenades into exposed entry hatches.

“On the one hand, it is clear that cool-headed infantry is more than a match for armor, especially in an urban environment,” he adds. “This lesson had been put to the test many times and many years before, by many countries. One wonders therefore why it wasn’t applied by the Georgians.”

But it’s also the case that a potential future conflict in the Baltics won’t involve Russia sending in heavy, conventional forces. At least at first.

In Ukraine, the Kremlin was wary of sending in the armor in large numbers until it appeared separatist troops in the east neared defeat. At the same time, it’s also unclear how effective more Ukrainian tanks would have stopped it. It might be a better idea to buy missiles.

This first appeared in 2014 for WarIsBoring here.