Love Your New TCL or Hisense 4K Smart TV? The Chinese Government Made That TV. 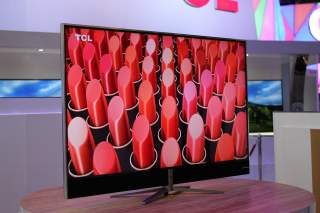 The era of the smart TV has arrived, and if you're like most people, you found the deals coming out of China just too good to pass up.

Sales of Chinese-made TCL televisions have risen to second place in the North American market, with other Chinese brands in hot pursuit. And don't think that just because you splurge on a fancy Sharp or Toshiba TV, you're buying a famous Japanese brand. Both are now been made by Hisense, China's bargain-basement brand specialist.

The world is addicted to cheap Chinese electronics. In the days of picture tubes and VCRs, that hardly mattered. As long as it worked long enough to become obsolete, any old brand was fine. And with most electronics becoming obsolete within five years, China's quality was good enough.

But when it comes to smart TVs, it's not the hardware that becomes obsolete the moment you leave the store. It's the software.

The very first thing you have to do after you power up your brand-new smart TV is connect it to the internet so that it can install updates. And the updates keep installing, month after month, for as long as you want to keep watching your TV. Only a true tech-head even knows that it's happening, never mind what it is doing. The rest of us just enable auto-updates and walk away.

Should we be worried?

Well, your smart TV is unlikely to download an electrostatic overload virus, go into sparky mode, and blow up your living room -- though if it ever does, you heard it here first. But your TV could download Chinese government spying software, report your viewing habits to Beijing, and (if it has a camera) enter your face into China's social credit scoring system. If your taste in television programming isn't quite up to the standards of China's official censors, they could just turn it off. That might be the worst punishment of all.

Seriously though, none of that is likely to happen. China's social credit system can't even tie its own shoelaces -- yet. But that's no reason for complacency. Considering that both TCL and Hisense are state-owned enterprises (SOEs) under the control of, respectively, the Qingdao and Guangdong provincial governments, maybe some of these dystopian near-futures aren't as far-fetched as they seem.

A more realistic concern is garden-variety digital insecurity. Smart TVs and other home electronics are notoriously hackable. The Chinese government may not want to commandeer your television set, but your neighbor just might. Any decent hacker can drive down the street trawling for insecure equipment to use as back doors into home wireless networks and hit pay dirt at every second home. Your smart TV could also be used by hackers to mount a distributed denial of service (DDoS) attack on someone else, a simple digital assault in which malicious code directs millions of infected devices to ping a target website at the same time, bringing it crashing down.

Yet all of these scary scenarios may be beside the point. The big picture here isn't the 85-inch 8K UHD TV occupying an entire wall of your living room. It's the strange idea that we should be buying our home electronics direct from a communist dictatorship that oppresses more than a billion people and threatens the peace of the world. Hisense and TCL aren't even private companies paying taxes that support the Chinese government; they are the Chinese government. For strange reasons of its own, the Chinese government is willing to sell you a cheap TV that sort of works. The question is: do you want to buy it?