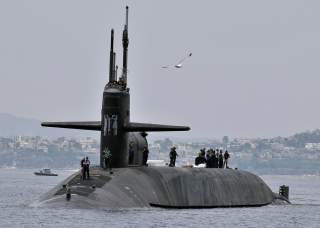 Citing the administrations Nuclear Posture Review released earlier this year, Baldanza said a new set of identified “low yield requirements” is “currently being used as the basis for initial study work and as the baseline for the program.”

The new lower-yield nuclear weapons are intended to give command authorities a wider range of attack options should they be needed to hold potential adversaries at risk amid high-threat confrontations, Secretary of Defense James Mattis told Congress earlier this year.

Many of the particular technical configurations are still to be determined, however the Pentagon planners have outlined an initial sketch of what these weapons might include, Hans Kristensen, Director of the Nuclear Information Project, Federation of American Scientists, told Warrior Maven.

One of the proposed options, he explained, might involve a first-of-its kind low-yield option wherein a different warhead would be configured onto existing nuclear armed Trident II D5 submarine launched nuclear missiles. Low-yield is as it sounds - smaller, more surgical and less destructive than most nuclear weapons.

The Trident, currently launched from ballistic missile submarines, carry a W-76 thermonuclear warhead carried inside a Mk-4 re-entry vehicle. It primarily functioned in the 80s a Cold War weapon and has since been upgraded many times.

“The Trident could be modified to “low-yield” by “disabling or preferably replacing the uranium canned sub-assembly to only the primary- the plutonium trigger – detonates with the relatively limited yield of 5-6 kt,” Kristensen explained. “That is much less complicated than building an entirely new warhead.”

(An essay from the "Arms Control Association" describes a canned sub-assembly as the secondary part of a nuclear explosive package comprised of uranium and lithium-deuteride. Plutonium is used during the primary stage, )

The principle advantage of this kind of weapon, is that it would offer a yet-to-exist long-range low-yield sea launched weapon. The existing Trident II D5 has a massive 100-kiloton yield, bringing massive destructive power to large swaths of territories – entire cities and well beyond.

“We don’t have a low-yield warhead on a long-range ballistic missile; and we have never had that,” Kristensen said.

A massively smaller 5-or-6 kt warhead on a Trident would still bring the advantage of long-range attack, yet afford smaller scope, and therefore less destructive, attack possibilities.

“A low-yield Trident W76-2 warhead would be harder to defend against than a warhead delivered by a bomber or a cruise missile,” Kristensen said.

This low-yield nuclear missile option does appear to add something not currently present in the US arsenal. While the emerging B-21 will be configured to fire lower-yield, more precise B61 Mod 12 weapons, a sub launched nuclear weapon bring newer avenues of attack and long-range strike without having to be over or near heavily defended areas from the air. The newer B61 Mod 12, Kristensen said, will bring even greater levels of precision than other lower-yield weapons such as the new W76-2 warhead for the Trident.

The LRSO, which could also be launched at farther stand-off ranges, is also designed for extremely high-risk areas armed with advanced air defense systems.

Some Russian-built air defenses, the S-400 in particular, currently leverage new digital networking technology and faster computer processing speeds designed to enable the detection of some stealth aircraft in certain scenarios. At the same time, the Air Force’s B-21 is being engineered with a new generation of stealth technology intended to elude any defenses anywhere in the world.

The other proposed nuclear weapons application, according to those identified by the NPR, is a shorter-range sea-launched cruise missile. Nuclear cruise missile options, potentially fired from a submarine or ship, can bring even more precision than a Trident configured with a low yield weapon, Kristensen said.

A weapon’s level of precision is often described in terms of what’s called Circular Error Probable (CEP). CEP stands for the area or radius of a circle in which 50-percent of the rounds will strike or land. Kristensen explained that while a low-yield Trident II D5 can bring a CEP of about 130-180 meters, an ALCM W80-1 is more precise, hitting a CEP of 30meters. A sea-launched cruise missile, therefore, would offer even greater levels of pinpoint attack, bringing more targeted or limited destruction.

Some have raised the question as to whether a sea-launched nuclear cruise missile could be fired from Vertical Launch Systems on board a surface ship such as a Navy destroyer. The answer, Kristensen said, is yes – but with many difficulties.

“That would require modifying a warhead and incorporating it into a cruise missile. The ship or attack submarine would then have to be upgraded with a nuclear-certified launch control system and communications, and the crew would have to be trained and certified to carry out the mission,” he said.

When testifying before Congress earlier this year, Defense Secretary James Mattis and other senior Pentagon leaders explained the NPR and its rationale for adding new low-yield nuclear attack weapons.

“Lower the Threshold” to Nuclear War

​Mattis and other senior leaders seem aware that elements of the NPRs strategic approach may reflect a particular irony or paradox; in response to questions from lawmakers about whether adding new low-yield nuclear weapons could “lower the threshold” to nuclear war and therefore introduce new elements of danger, Mattis told Congress that increasing offensive nuclear-weapons attack capability will have the opposite effect, meaning the added weapons would improve deterrence and therefore enhance prospects for peace.

The debates about these weapons are resurfacing with renewed vigor as some lawmakers echo concerns that plans for new low-yield weapons may inspire a dangerous new nuclear arms race. In a recent appearance at American University, Sen. Elizabeth Warren, D-Mass., opposed the current low-yield weapons plan, citing costs and risks of unwanted escalation.

At the same time, Sen. Jon Kyl, R-Ariz., recently echoed Mattis' remarks to Congress earlier this year. In a recent Washington Post OPED, Kyl writes that that low-yield weapons were needed to maintain balance with Russia.

This aligns with Mattis' remarks to lawmakers several months ago, which argued that a new, low-yield Submarine-Launched Ballistic Missile could likely provide pressure on Russia to a point where they might be more inclined to negotiate about adhering to the INF treaty they have violated.

“We have an ongoing Russian violation of the INF. We want our negotiators to have something to negotiate with because we want Russia back in compliance,” Mattis told lawmakers earlier this year.

Furthermore, Russia’s recently announced new nuclear cruise missile is of course not lost on anyone at the Pentagon.

“A nuclear-armed sea-launched cruise missile and the modification of a small number of existing submarine launched ballistic missile warheads to provide a low-yield option – will enhance deterrence by ensuring no adversary under any circumstances can perceive an advantage through limited nuclear escalation or other strategic attack,” Gen. Paul Selva, Vice Chairman of the Joint Chiefs of Staff, told reporters earlier this year, according to a DoD transcript.