M1 Abrams: This Tank Is Old (But There Is Nothing Like It On the Planet) 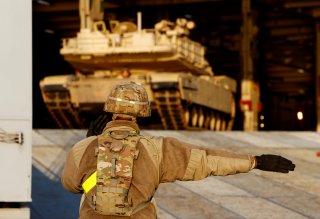 Yet meanwhile, an interesting and often under-recognized fact is concurrently operating beneath the radar, the apparent reality that the Abrams tank is going nowhere. Instead, the much upgraded and changed 1980s-era platform is powering along with an ambitious and long-term modernization plan, an approach which routinely focuses upon the Abrams tank as a key platform for continued innovation and technological breakthrough in the areas of command and control, artificial intelligence (AI), manned-unmanned teaming and heavy weapons attack.

The Army continues to test weapons systems, refine tactics, explore new technologies and transit rigorous terrain with the Abrams tank to prepare the platform for major mechanized great power warfare. As part of this ongoing process, the Abrams tank recently drove more than two thousand miles in “rugged conditions across three seasons of sub-Arctic weather” in Alaska, according to an Army report. As part of the exercises, the Abrams tank fired hundreds of ammo rounds in extremely cold circumstances, while also testing its auxiliary power unit.

There are several key variables that likely continue to inform Army plans to preserve its heavy Abrams tank for decades into the future. These variables include AI-enabled computing and sensing, manned-unmanned teaming and long-range, multi-domain connectivity. For example, when confronted with a large group of fast-approaching, unidentified enemy armored vehicles on the attack, future Army tanks will need the ability to receive and organize incoming surveillance data, identify an enemy target and take the necessary defensive measures to include maneuver or counterattack. Perhaps a forward-operating drone captures surveillance videos of the approaching attackers, transmits the images directly to a tank engineered with AI-enabled computing able to instantly find moments of tactical relevance in the video, identify the threat and present organized information to human decision-makers in a position to counterattack.

These kinds of nuanced and highly complex combat circumstances pertain to ongoing Army and industry efforts to strike an optimal balance between AI-enabled autonomous systems and irreplaceable human decision-making. This kind of strategic synergy, which draws upon the unparalleled advantages offered by both AI-empowered computing and human thought, may be one reason why the Army may ultimately both keep an upgraded platform like the heavily armed Abrams tank for many years longer than anticipated while concurrently developing future, potentially unmanned, armored combat vehicles.

Deliberations about how to somehow reconcile a specific paradox fundamental to future armored vehicles have continued for as long as several decades. The problem at hand involves vehicle weight, technology, and survivability. Futurists and weapons developers are exploring how to engineer a lightweight, deployable and highly lethal armored vehicle with the levels of survivability needed to withstand heavy incoming enemy fire and prevail in major armored warfare. The question is whether that can actually be done as there may be little or no substitute for the protection and firepower of heavily armed manned platforms like an Abrams tank. At the same time, keeping the Abrams tank does not preclude or diminish the possibilities for engineering faster, lighter weight and potentially unmanned vehicles to operate alongside a heavy tank. The Army seems to be pursuing both. Why not?

A vehicle that is too heavy might lack the mobility to cross bridges, keep up with fast-moving tactical vehicles or deploy quickly as part of some kind of rapid response attack does introduce some limitations. However, a vehicle too lightly armored and protected, no matter how lethal its weapons, might massively imperil the lives of soldiers operating the platform. This fundamental quandary persists, leading some to argue that a platform like a heavily armored, seventy-ton Abrams tank should remain in the service for decades into the future, while others point to the need for speed and improved expeditionary warfare capabilities. While much has yet to be determined, the answer may well involve both.