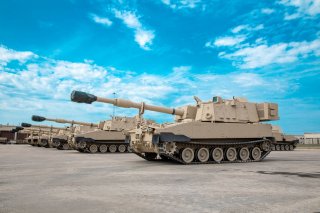 The First Cavalry Division took to social media last week to announce that the GREYWOLF brigade had received the upgraded Paladin M109A7 Artillery system, which is the latest howitzer in the BAE Systems M109 family.

“Say hello to the M109A7 Paladin, and the most recent addition to the GREYWOLF Family!,” the unit said in a tweet on the micro-blog social media platform Twitter. “The modernization efforts we make now, will enhance combat power within America’s #FIRSTTEAM, the U.S. Army, and entire Department of Defense during future large scale ground combat operations!”

The M109A7 will replace the current M109A6 Self-Propelled Howitzer—which was also known as the Paladin Built-in Administration program. The M109 Paladin first saw action in the Vietnam War more than a half-century ago and the upgraded versions can strike targets up to nineteen miles away or with special ammunition that can even hit targets as far as twenty-five miles away. With its huge turret, the M109 could be mistaken for an oversized tank, but its armor is actually only meant to stop small arms fire and shrapnel, and the platform isn’t intended to engage enemies with direct fire.

This next-generation howitzer incorporates enhanced capabilities that include a new chassis, engine, transmission, suspension and steering systems—so this upgrade is akin to an automotive manufacturer updating a popular line with a new body and engine. Many of the elements are reportedly widely incorporated in the U.S. Army’s Bradley Fighting Vehicles, and this commonality will reportedly reduce the overall program cost as well as the logistical footprint. It will also improve the survivability of the self-propelled howitzer and allow the platform to maintain dominance on the battlefield.

While the M109A7 entered full-rate production last year, the Army had accepted delivery of the first low-rate initial production of the M109A7s in April 2014. In March, the Army also awarded BAE Systems a $339 million contract modification for the production of 48 vehicle sets of the vehicle and its companion, the M992A3 Carrier, Ammunition, Tracked (CAT) vehicle, and included post-delivery support and spare parts.

This may not be the final update of the platform. Last year an Army research project called for the development of an autonomous system could perform functions such as loading shells into cannons. As the Paladin has a crew of four—including a loader and gunner—such a robot-based system could the number of soldiers who are assigned to each vehicle.

While such upgrades could come in the future, for now, the M109A7 is considered to be the most cost-effective method to significantly improve sustainability and survivability, while also reducing the logistics burden on the U.S. Army Armored Brigade Combat Team and supporting fire brigades. Production of the M109A7 is being performed at Anniston Army Depot, Alabama and BAE Systems facilities in York, Penn.; Minneapolis, Minn.; Sterling Heights, Mich.; Endicott, N.Y.; and Elgin, Okla.