The Macchi MC.200 ‘Saetta’ is the Forgotten Axis Fighter of World War II 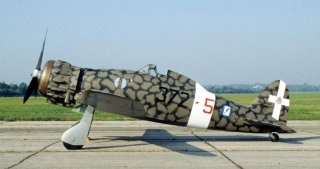 There are many “famous” and even quite memorable World War II fighter aircraft. The United States had the Republic P-47 Thunderbolt and the North American P-51 Mustang, Great Britain had the Supermarine Spitfire and the Soviets had the Ilyushin IL-2, while Germany had its Messerschmitt Bf 109. Yet far lesser-known among the Second World War fighters is the Macchi MC.200 “Saetta” (Lightning), which was one of the principal aircraft flown by the Regia Aeronautica (Italian Air Force).

However, its greatest contribution to the war effort may not have been for Italy, but rather the United States as a captured MC.200 was used as part of a war bonds campaign.

The aircraft was developed in the 1930s to serve as a modern monoplane fighter, powered by a radial engine and featuring retractable landing gear. Such features were common during World War II, but the Saetta was somewhat revolutionary when it was designed. Aviation engineer Dr. Mario Castoldi was charged with developing the new fighter, and he may have been a unique choice as his past aircraft designs were for Italian seaplanes for the civilian market. However, he based his design on experience the Italian military learned in its mid-1930s conquest of Ethiopia.

The result was the MC.200—the MC standing for “Mario Castoldi”—which proved to be a robust fighter that was quite maneuverable, even if it lacked in speed as its Fiat A74 RC38 14-cylinder air-cooled radial piston engine produced just 870 horsepower, giving the fighter a maximum speed of 315 miles per hour. Despite some modern features, such as the retractable landing gear, Castoldi’s design had some antiquated features, which included its two 12.7mm Breda machine guns that fired through the propeller.

When Italy entered World War II in June 1940, some 156 of the aircraft were in service and it was employed for the first time against the British on the Mediterranean island of Malta. It was later used in the Italian invasion of Greece, served in North Africa, Yugoslavia, and the Soviet Union. By the end of World War II a total of 1,151 MC.200s had been produced, and it was among the only aircraft to be used by both sides after Italy’s withdrawal from the Axis in 1943. Around twenty-three Saettas were employed with the Italian Co-Belligerent Air Force, based in southern Italy; while a small number, totally only as many as eight, were used by the pro-German National Republic Air Force, which was based in northern Italy.

Despite the fact that more than one thousand were produced, most were destroyed during World War II, while a few were used as trainers by the post-war Italian military. Only a single surviving example is known to have survived, and it had been transferred from the Regia Aeronautica’s 372nd Squadron in Italy to the 165th Squadron in North Africa during November 1942. It was abandoned at the Benghazi airfield following the Battle of El Alamein. It was captured by British forces and then shipped to the United States where it was exhibited in an effort to sell war bonds while it was later displayed in the New England Air Museum.

The Saetta was subsequently purchased by a private collector who had it restored in Italy, and it was later transferred to the National Museum of the United States Air Force.