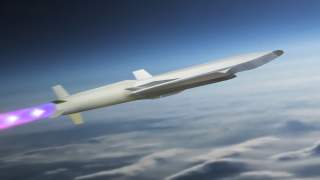 Key point: This hypersonic weapons acceleration is taking place within a high-threat global environment. Alongside Russia, China has also been visibly conducting hypersonic weapons tests, leading some to raise the question as to whether the US could be behind key rivals in this area.

The Russian hypersonic weapons test is shining light upon an aggressive US plan to prototype, test and deploy hypersonic weapons on an expedited schedule -- to defend against enemy attacks by fast-tracking an ability to launch high-impact, high-speed attacks at Mach. 5 - five times the speed of sound.

“We would like all the resources we can build into the kill chain to hit any target or hold it at risk with hypersonic weapons,” Gen . Timothy Ray, Air Force Global Strike Command, said at the Air Force Association Air, Space & Cyber Conference in September.

Russian President Vladimir Putin is, according to numerous news reports and Russia's own state news operation, calling the test a tremendous success, adding that the weapon is "invincible" and ready to enter service next year.

The actual technological capacity of the new Russian weapon has not, as of yet, been verified by public US reports.

​​Legitimate or not, a Russian weapon traveling at hypersonic speeds, naturally, would better enable offensive missile strikes to destroy targets such and enemy ships, buildings, air defenses and even drones and fixed-wing or rotary aircraft -- depending upon the guidance technology available.

“The challenges becomes your ability to defend against hypersonic weapons - they are not easily defendable,” Ray told an audience at the AFA Conference.

Hypersonic weapons will quite likely be engineered as “kinetic energy” strike weapons, meaning they will not use explosives but rather rely upon sheer speed and the force of impact to destroy targets, developers explain.

A drone or unmanned ISR platform traveling at hypersonic speeds would better enable air vehicles to rapidly enter and exit enemy territory and send back relevant imagery without being detected by enemy radar.(Mitchell Institute for Aerospace Studies report on Hypersonic Weapons HERE)

Scientists explain that speed of sound can vary, depending upon the altitude; at the ground level it is roughly 1,100 feet per second. Accordingly, if a weapon is engineered with 2,000 seconds worth of fuel – it can travel up to 2,000 miles to a target, former Air Force chief scientist Gregory Zacharias told Warrior in a previous interview.

The most recent award was cited recently in the service’s “Around the Air Force” new report, which said that Air Force Secretary Heather Wilson is “moving as fast as possible” when it comes to hypersonic weapons.

Now, this aggressive new Air Force hypersonic weapons prototyping and demonstration effort is expected to change this time frame in a substantial way.

These kinds of propulsion and weapons technologies are currently informing the exploration of hypersonic drone platforms able to surveil, strike and defend.

Lockheed’s Skunk Works division is currently working with the Pentagon on the SR-72 hypersonic drone, designed to travel at Mach 6. Visions for this platform, according to reports from Popular Mechanics and Aviation Week, incorporate engineering the drone for strike missions as well. Current plans call for a “Flight Research Vehicle” to be constructed in the early 2020s, with a full-scale version to be in service sometime in the 2030s, the Av week report states.

Often referred to as "agile acquisition" by Air Force senior leaders, to include service Secretary Heather Wilson, fast-tracked procurement efforts seek quicker turn around of new software enhancements, innovations and promising combat technologies likely to have a substantial near-term impact. While multi-year developmental programs are by no means disappearing, the idea is to circumvent some of the more bureaucratic and cumbersome elements of the acquisition process.

This hypersonic weapons acceleration is taking place within a high-threat global environment. Alongside Russia, China has also been visibly conducting hypersonic weapons tests, leading some to raise the question as to whether the US could be behind key rivals in this area.

A report in Popular Mechanics sites Chinese State Media as having announced a successful test of a new “wave-rider” hypersonic vehicle.

Also, a report in The Diplomat earlier this year outlines Chinese DF-17 hypersonic missile tests in November of last year.

“They are able to evade and conceal their precise targets from defenses until just seconds before impact. This leaves targeted states with almost no time to respond…..Hypersonic missiles require a reconsideration of traditional second-strike calculations, as they have the potential to decapitate a nation's leadership before it has the opportunity to launch a counter attack,” Speier writes.