Mach 6 and It Nearly Went Into Space: Nothing Beat the Air Force's Hypersonic X-15 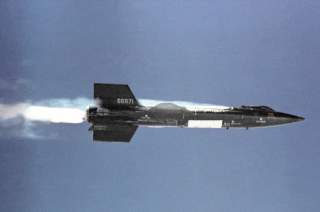 One little-known fact was that the X-15 cockpit was pressurized with nitrogen instead of oxygen as was used in the Mercury and Gemini spacecraft. The pilot breathed oxygen from his suit which was only pressurized upon ejection. This meant the cockpit was fireproof, something that NASA tragically learned with the launch pad fire on Apollo 1.​

The X-15 is a famous and significant part of aviation history. Its purpose was to fly high and fast, testing the machine and subjecting pilots to conditions that future astronauts would face. It made the first manned flights to the edges of space and was the world’s first piloted aircraft to reach hypersonic speeds, or more than five times the speed of sound. The X-15 was an important tool for developing spaceflight in the 1960s, and pilots flying above 50 miles altitude in the X-15 earned astronaut wings.

Like other rocket planes, the X-15 was launched in midair from a B-52 “mothership” at about 45,000 feet. Once its powerful rocket ignited, the X-15 streaked upward to the limits of the atmosphere, then glided unpowered to land on a dry lake bed.

As JP Santiago explains in an interesting article appeared on his website Tails Through Time, because of its hypersonic speed and extreme altitude performance, the X-15 required one of the most complex ejection seats ever put into service. Earlier NASA research rocket aircraft like the Douglas D-558-2 Skyrocket and the Bell X-2 were equipped with an escape capsule for the pilot. In an emergency, the entire nose assembly would jettison and deploy a stabilizing parachute. Once at a safe altitude, the pilot would then manually open the canopy and bail out. However, the weight and volume restrictions on the X-15 made such a system impractical and North American in conjunction with engineer/test pilot A. Scott Crossfield, North American Aviation designer Jerry Madden and the David Clark Co. (that had long made pressure suits for the military and NASA) designed an integrated system that combined the pressure suit design along with an advanced ejection seat.

As told by Jim Tuttle in his book Eject!: The Complete History of U.S. Aircraft Escape Systems, David Clark’s MC-2 pressure suit was the key to making an open-faced ejection at high Mach and high altitudes possible. It not only protected the pilot from the extreme windblast of hitting the airstream at Mach 3+, it also functioned as a pressure suit to protect the X-15 pilot at altitudes in excess of 250,000 feet. Despite the advanced nature of the pressure suit, it was understood that kinetic heating during a high-Mach ejection would probably result in mild burns to the head, knees, and toes which in effect projected into the airstream.

Since the rocket motor of the X-15 ejection seat had to be powerful to propel the pilot clear of the X-15’s hypersonic shockwave, a novel means was used to transfer loads from the pilot’s rear end to the seat pan. Each X-15 program pilot sat on a weather balloon filled with plastic beads and wiggled into it like a bean bag. A vacuum was applied which held the shape of the balloon. Once the pilot stood up, plaster of Paris was poured into the depression, creating an exact copy of the pilot’s rear end. A block of Balsa wood was then carved to precisely fit the mound and this became the seat cushion of the X-15’s ejection seat- not only was it custom fit which allowed the optimum transfer of shock loads from the pilot’s body to the seat pan, it also made for a very comfortable seat!

Once the articulated arms deployed into place, the emergency oxygen supply took over pressurization of the suit and a heating unit activated to keep the pilot’s helmet visor clear of ice. Once the canopy was blown off and the seat traveled up the rails, special wings on the sides of the seat deployed to stabilize the seat in the high-Mach airstream. In a conventional ejection seat, a drogue chute would be deployed to slow the seat down but at the X-15’s speeds, such a chute would have melted instantly, so the X-15’s seat deployed a pair of telescopic booms that projected aft and outward from the bottom of the seat to provide aerodynamic braking and helped the wings stabilize the seat.

One little-known fact was that the X-15 cockpit was pressurized with nitrogen instead of oxygen as was used in the Mercury and Gemini spacecraft. The pilot breathed oxygen from his suit which was only pressurized upon ejection. This meant the cockpit was fireproof, something that NASA tragically learned with the launch pad fire on Apollo 1.

The X-15s set an absolute speed record of Mach 6.7 and an absolute altitude record of 354,000 feet which qualified several of its program pilots for astronaut wings. Fortunately the ejection system was never needed and the one fatality, Michael Adams, occurred when his X-15 lost control and broke up on re-entry into the thicker levels of the atmosphere and the X-15’s complex ejection system might not have saved him.

Noteworthy, the David Clark MC-2 pressure suit served as the basis for the space suits for the Mercury and Gemini programs. The aluminized fabric exterior of the MC-2 suit carried over to the space programs and heavily influenced Hollywood cinematic depictions of space suits well into the 1970s.

(This first appeared in June 2019 and is being republished due to reader interest.)