Made in China? Why Chinese Components Were Found Inside the F-35 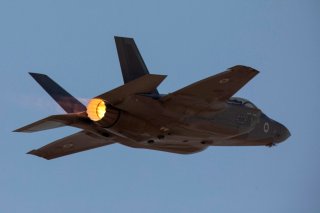 Though the alloy for an engine component did originate in China, there is likely no risk to the warplane.

Contracting officials that source materials for the F-35 disclosed last week that a magnetized alloy—a component in the warplane’s engine—comes from China. Though shocking, the revelation does not seem to compromise the F-35 fighter’s capabilities, though officials have clarified that they will source the metal from other non-Chinese sources.

“They’re looking at two things, impact on security—if any—and impact on airworthiness or safety—if any. Right now, so far, there doesn’t appear to be any,” a Department of Defense official explained to a group of reporters late last week.

“If we, in fact, find neither of those to be the case, we’ll be able to do a waiver and do the replacements and get the production line moving again. So I’m hoping this is going to be resolved pretty soon.”

An F-35 program spokesman told USNI News that the plane’s security had not been compromised. “We have confirmed that the magnet does not transmit information or harm the integrity of the aircraft and there are no performance, quality, safety, or security risks associated with this issue and flight operations for the F-35 in-service fleet will continue as normal.”

The magnetized alloy is part of a component in the F-35’s engine but is not directly connected to any of the aircraft’s electronic components.

Honeywell, which produces some components for the F-35, including the Chinese-sourced alloy, also issued a statement.

“Honeywell remains committed to supplying high-quality products that meet or exceed all customer contract requirements. We are working closely with DOD and Lockheed Martin to ensure that we continue to achieve those commitments on products Honeywell supplies for use on the F-35.”

The revelation about the alloy prompted the Department of Defense to suspend deliveries for several F-35s from the plane’s prime contractor Lockheed Martin until the situation could be better understood and assessed for how significant the risk to the program could be.

However, Lockheed Martin assured the Department of Defense that there is no risk to the program.

“We are working with our partners and DoD to ensure contractual compliance within the supply chain. The magnet has no visibility or access to any sensitive program information. The F-35 remains safe for flight, and we are working with the DoD to resolve the issue as quickly as possible to resume deliveries.”

So despite the embarrassing nature of the component’s sourcing, given the increasing tensions between the United States and China, the risk, it seems, to the F-35 program is low to none.