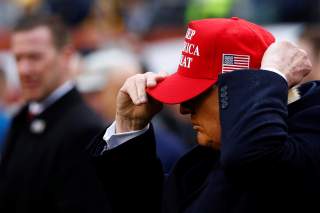 The president’s job approval rating is now at 45% while Americans remain divided over whether Trump should be impeached, Gallup’s poll found. Currently, 46% support impeachment and removal, down six points from when House Speaker Nancy Pelosi announced the inquiry.

More than 50% oppose impeachment and removal, an increase of five percentage points.

The poll, which was conducted between Dec. 2-15, shows political independents are shifting on the issue — they supported impeachment in October polls by roughly 55%, Gallop noted. Support for impeachment and removal is now down below 50% among independents, the poll found.

“The impeachment process has been a divisive one for the country, carrying risks for both political parties,” Gallop analyst Justin McCarthy noted in a statement announcing the numbers. He added that Congress’ approval numbers have increased, too.

Roughly 27% of voter approve of the job Congress is doing, which is up from 18% in early September, according to the Gallop poll. Gallop surveyed 1,025 adults and the poll contains a ±4 percentage points margin of error at the 95% confidence level.

He added: “As of now, it appears to be helping both Trump and Congress. While neither enjoys stellar approval ratings, they have both improved in their standing since the beginning of the impeachment process.”

Trump’s poll surveyed 900 likely voters in the 30 congressional districts that the president won in 2016 but are currently occupied by Democrats.

Voters in those districts oppose impeachment by 10 percentage points, 53-43, and would support a new candidate over the Democratic incumbent by 11 points, 47-36, according to the Trump campaign’s internal polling.