Make No Mistake, China Really Does Want to Dominate the Pacific 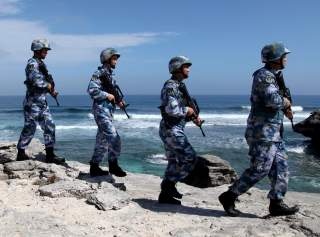 In this decade, the United States Navy may be displaced as the most formidable maritime presence in the Pacific Ocean. China is determined to challenge America’s ability to project military power forward into the Western Pacific. It seeks to undermine the U.S. capability of standing with its allies and deterring China from using military force to coerce small nations into making concessions on their sovereignty and the enforcement of binding treaty commitments. Denying Beijing’s quest to become the region’s dominant land and sea power will require more than traditional naval strength. A comprehensive strategy that understands the unfolding fourth industrial revolution and the Chinese government’s problematic activities will be necessary to deny China’s bid for maritime primacy.1

China’s emerging blue-water navy, backed by comprehensive national and maritime power, is “tipping the balance in the Pacific.” In the span of 35 years, the People’s Liberation Army Navy (PLAN) has been transformed from a coastal defense force into a serious peer competitor for the U.S. Navy and its allies in the Western Pacific. The balance of naval power is particularly favorable to China in its near seas where shore-based missiles and aircraft can support the PLAN fleet. Together, China’s shore-based weapon systems and its fleet of small combatants are likely now sufficient to defend China’s near seas, which frees up the PLA Navy’s growing inventory of large vessels for power projection.

While the U.S. still fields more large combatants than the PLAN, the pace of China’s large combatant shipbuilding is accelerating. China is continuing to expand and modernize its shipyards so that they can build more large combatants simultaneously. Meanwhile, China is converting existing facilities for making small combatants into facilities to produce large warships. Retired Rear Admiral Michael McDevitt predicts that by 2035 China’s major surface fleet could add as many as 140 new large combatants and approach numerical parity with the U.S. Navy. If that occurs, China would not only pose a threat within a radius of its shore-based assets but anywhere its fleet sails.

Without an effective counterweight, China may well come to militarily dominate the majority of the maritime Indo-Pacific in the near future. While Beijing already enjoys a global maritime reach, the sharpest impact of its ascending naval power affects potential contingencies involving Taiwan, the Senkaku Islands in the East China Sea, and disputes in the South China Sea. The PLAN and its auxiliary forces intend to keep this trend going in the decade ahead, making the 2020s a “Decade of Concern.”

The PLAN’s surface ship prowess is improving in both quantity and quality. During the decade beginning in December 2008, the PLAN deployed 100 ships in 31 naval task forces to the Gulf of Aden, thereby using a nominally counterpiracy mission to build a truly blue-water navy capability. In December 2019, the PLA Navy commissioned its first indigenously produced aircraft carrier, the Type 001A Shandong, with a 70,000-ton displacement and a short take-off but arrested recovery (STOBAR) system similar to that of its first aircraft carrier, the Liaoning, a 1985 Soviet platform later purchased, overhauled, and eventually commissioned by the PLAN in 2012. Another four aircraft carriers are planned, and these may include nuclear-powered engines and a catapult assisted take-off but arrested recovery (CATOBAR) system.

For now, however, China’s aircraft carriers convey greater prestige than combat power, and the PLAN surface fleet remains focused on a growing number of modern destroyers, frigates, and corvettes. These surface ships include the new Type 055 large destroyer armed with 112 vertical launch system cells. China’s destroyers have fewer VLS cells than their U.S. counterparts. Still, when operating within range of short-based missile defense systems, they can dedicate a larger percentage of their missile inventory to attack rather than self-defense. As experts like Bryan Clark have noted, the missiles on China’s combatants can also out-range U.S. missiles, meaning PLAN vessels can target U.S. Navy ships before they can return fire. So far, China has launched six Type 055 destroyers and 24 Type 052D destroyers, dubbed the “Chinese Aegis.” The pace of shipbuilding surpasses that of any other navy today. For instance, in December 2019 alone, China launched two Type 056A missile corvettes, two Type 052D guided-missile destroyers, and one Type 055 guided-missile destroyer, as well as having commissioned into service the Shandong aircraft carrier.

More worrisome for a potential Taiwan or East or South China Sea scenario, however, is the expansion of China’s amphibious force. Last year, the PLAN began construction on its first big-deck amphibious assault ship, the Type 075 landing helicopter dock (LHD). Adding the rough equivalent of the USS Wasp to other Chinese capabilities, including some 37 large amphibious landing ships and 22 medium landing ships, it appears that the PLAN is replicating the combined U.S. Marine and Navy amphibious task forces—Marine Expedition Unit/Amphibious Ready Group (MEU/ARG) – that currently deploy throughout the Indo-Pacific and elsewhere. The combined air-sea-ground capability represented by the 31st MEU based in Japan, for instance, conducts joint training with partners, delivers timely humanitarian assistance and disaster relief (HA/DR), and otherwise signals U.S. interests and influence. China appears to be on the cusp of replicating this amphibious capability and with it an ability to conduct the same range of influence operations, exercises and training, noncombatant evacuation operations (NEOs), and HA/DR missions. Moreover, China’s quantitative advantage in ships, backed by a massive shipbuilding industry and para-naval forces, conveys a message throughout the Indo-Pacific that Beijing is becoming more capable of coercing regional neighbors into abiding by China’s rules and claims.

Meanwhile, undersea capabilities remain a vital part of the PLA’s naval capabilities. The PLA is steadily modernizing its mostly non-nuclear-powered submarines and investing in unmanned undersea vehicles (UUVs) and seabed research and survey vehicles. One notable development has been the creation of “a deep sea base for unmanned submarine science and defense operations in the South China Sea, a center that might become the first artificial intelligence colony on Earth.”

The PLAN remains focused on its near seas, a fact attested to by its relatively small inventory of replenishment ships. However, China is developing a replenishment system designed to be used on existing civilian ships. Moreover, given China’s shipbuilding capabilities, on top of building a base in Djibouti and constructing various ports that could in the future accommodate naval vessels, Beijing is not as hamstrung by logistical shortfalls as some might think.

China can backstop its naval presence with not only advanced land-based airpower but especially with its array of anti-ship and land-attack cruise and ballistic missiles. Two land-based, road-mobile anti-ship ballistic missiles pose a direct threat to U.S. Navy combatants. The DF-21D has a range of more than 1,000 miles and is the first ASBM designed to hit ships at sea. The DF-26 intermediate-range ballistic missile boasts a range of about 2,500 miles, and it can carry either a conventional or nuclear warhead. Both missiles can achieve much greater range if delivered by air on the PLA’s new H-6N bomber, which is also designed to carry supersonic cruise missiles and UAVs, among other weapons. As if to emphasize the psychological warfare element of Beijing’s total competition, these missiles are often referred to as the “carrier-killer” and “Guam express” weapons designed to push the U.S. military out beyond the second island chain. Meanwhile, China is reportedly developing hypersonic glide vehicles (HGVs) that would be much harder to intercept.

Beyond all of these capabilities, China augments its naval power in the Pacific by exploiting information across all dimensions of policy, including its advances into the new domains of cyberspace, outer space, and the electromagnetic spectrum. The PLA’s quest to master the new domains is being realized through massive investment and reorganization to include a Strategic Support Force that integrates “PLA space, cyber, electronic, and psychological warfare capabilities.”

Also worth noting is that China essentially has two additional navies, each of which is the largest of its kind in the world. The China Coast Guard (CCG) inventory includes at least 142 lightly armed oceangoing vessels. If added to the PLA Navy’s force of over 335 commissioned combat submarines and surface combatants, China’s maritime force numbers 477 combat vessels—more than twice the number of comparable U.S. Navy combat vessels and nearly four times the number of U.S. Navy combat vessels assigned to the Pacific Fleet. A vast People’s Armed Forces Maritime Militia (PAFMM) and an organized civilian fishing fleet also give the PLAN and CCG vessels a major para-naval auxiliary force. Together, these so-called “three navies” constitute a gray-, white-, and blue-hulled force with nothing comparable in the U.S. alliance network.

Leadership in an Era of Total Competition

A more powerful China flexing its muscle at sea and in new domains is casting longstanding U.S. regional leadership and commitment in a harsher light in East Asia and the Pacific. Despite formidable headwinds, the Chinese economy is still seen as the dominant driver of the regional economy. Nearly four of five Southeast Asians polled view China as the dominant economic power, and twice as many (52 vice 26 percent) see China rather than the United States as the dominant political and strategic power in the region.