To Make Sanctions Bite, Close the Backdoor to Russia’s Economy 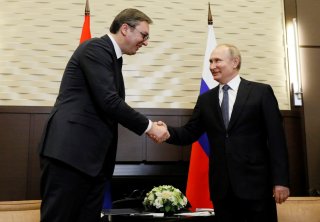 Defiantly proclaiming his plans to resist mounting pressures to sanction Russia, Serbia’s strongman, Aleksandar Vučić, made his country notoriously conspicuous last week as the only nation in Europe not to slap sanctions on Ukraine’s invaders.

But casting aside his country’s EU aspirations in a naked bid to placate Moscow—long perceived domestically as a guarantor of Serbian sovereignty—seems an odd choice. An Orthodox people, Serbians harbor cultural sympathies for their Slavic cousins. But ethnolinguistic and religious ties belie the full story.

A month shy of Serbia’s presidential and parliamentary elections, Vučić and his comrades are both politically beholden to Vladimir Putin and petrified of Serbia’s electorate. By refusing to sanction Russia, Serbia—with its foreign-owned banks, Association Agreement with the European Union, and Free Trade Agreement with Russia—signaled itself to be a wide-open backdoor and a gaping hole through which illicit monies and illegal goods from Moscow can pass undetected to Europe’s cities.

Let’s be clear: Vučić’s defiance of U.S.-imposed sanctions wasn't a heroic act of Russian allyship, it was a thinly veiled ploy to get rich. His brother and best friend—cited by the U.S.-sponsored Organized Crime and Corruption Reporting Project—is reportedly soon-to-be “high on the US sanctions list.” Meanwhile, Freedom House reports that “Russia has been accused of attempting to influence Serbian politics through its state-owned media and an array of small pro-Russian parties, media outlets, and civil society groups in Serbia.”

At the very moment the Kremlin needed a place to hide its cash—and with the populist Serbian Progressive Party (SNS) vying for re-election—Vučić prostrated himself before his Russian benefactors. It’s hardly surprising: his presidency has been marked by repeated allegations of corruption and Soviet-style repression.

The same may be said for Armenia—a country with both military and financial ties to Russia and through which sanctioned Russian funds are already flowing quicker than a burst oil pipeline. As a member of the Eurasian Economic Union (EAEU)—an EU copycat for a handful of post-Soviet states that remain in Russia’s orbit—trade flows freely and there are no customs borders between members.

Armenia’s potential to serve as a vehicle for Russian monies may be even greater than Serbia’s, and the country’s politicians aren’t curtailing their enthusiasm. “Armenia is open for Russian business!” proclaimed the Armenian economy minister, with staff from his investment agency boasting on Twitter that “dozens of Russian companies and dozens more” are already moving their headquarters and financing to Armenia.

In many ways, Armenia presents a more dangerous conduit for sanctioned Russian trade than Serbia does. With its diaspora in France and the United States, financial flows of aid, investment, and remittances already flow easily between them via the international SWIFT payments system into Armenian banks. Allowing this colossal black hole to remain open means Western sanctions will be successfully and repeatedly breached.

There’s no excuse for the United States, United Kingdom, or EU to hold back against Russia’s nation-state lackeys or the Kremlin. While they will claim that there are genuine reasons for refusing to cut off these financial flows, no credible excuses exist. Indeed, not all post-Soviet states are so intoxicated; some are in fact demonstrating remarkable sobriety.

Consider the examples set by Hungary and Azerbaijan.

Hungary, an EU member who experienced a Russian invasion itself, was one of the very first Western governments not just to condemn the invasion but to demand sanctions on Russia, as well as insist on its ejection from the SWIFT. Long viewed as a poster-boy for Putin in Europe, Hungarian prime minister Viktor Orban was faster than Germany, Italy, and France to pledge action in Eastern Europe’s escalating crisis.

Another such example is Azerbaijan, which this week barred all banks from making trade and financial payments in Russian rubles. The country is even resourcing Ukrainian emergency services and humanitarian agencies with free fuel via their network of state-owned SOCAR gas stations in Ukraine. They have additionally offered their capital city Baku as a location for peace talks.

Azerbaijan’s independence is both longstanding (they refused EAEU membership and quit Russia’s Collective Security Treaty Organization military alliance) and exceptional insofar as it has a garrison of Russian “peacekeeping” troops stationed within its borders—a holdover from a 2020 conflict with Armenia that Russia ended through a combination of negotiation and threats. And unlike Armenia and Serbia, the country has demonstrated autonomy from Russian influence despite sharing a 200-plus mile border with the country from Georgia to the Caspian Sea.

In the coming days and weeks, we are certain to hear excuses from the Serbs and the Armenians. Both will claim their options are limited—while doing everything to ensure Moscow’s cash continues to flow towards their coffers.

But the excuses are as cowardly as they are disingenuous.

While reminding Serbs that Russia stood by them, at least in spirit, when they were bombed by NATO in the 1990s, Vučić failed to demonstrate any solidarity with the Ukrainian people who are themselves being targeted with bombs daily. When Armenia’s minister of economy proclaimed open arms for Russian business, he failed to mention that it is the Russia-dominated EAEU that has long impoverished his people. And neither copped to what they are really doing: aiding and abetting sanctions evaders.

Contrary to popular media narratives, Russia has friends and is quietly redirecting financial flows and business to allies in a determined effort to evade Western sanctions. U.S., UK, and EU officials should tighten the noose around Moscow’s neck by sanctioning those countries intent on providing a backdoor to Russia’s economy.