Making Space for the Next National Defense Strategy... In Space 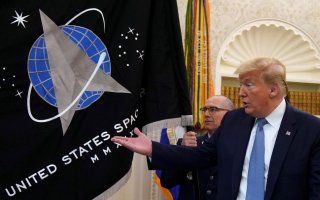 The 2018 National Defense Strategy (NDS) allocated only three sentences to the role of space in national defense, inadequately reflecting the role of the space domain in future warfighting. This most recent NDS was published when the U.S. Space Force (USSF) was merely a concept in name only. However, space proved essential to the 2018 NDS efforts towards a more lethal force, stronger alliances, and greater departmental performance, thus demonstrating that the next NDS should further emphasize outer space operations.

Just as individuals are reflecting on the last year’s successes and failures and establishing priorities in the new year, institutions should look for areas of improvement that account for the growing complexity in which they operate. Specifically, the Defense Department must take inventory of the threats and challenges of the coming years and identify initiatives and goals for the next National Defense Strategy that will strengthen U.S. military superiority. Now is the time to reevaluate previous ambitions and imagine new ones as strategists prepare for the next NDS likely in 2022.

The next NDS must zero in on the unique advantages space can bring to the fight and highlight the USSF’s growing significance to national defense. The USSF has the potential to become the lynchpin of future US warfighting victories, but only through defense planning that bolsters the new force. In anticipation of a refined NDS, U.S. defense strategists must evaluate the ways in which the USSF addressed the lines of effort laid out in 2018 and reassess the path forward.

1) New Capabilities for a New Domain

Outer space has long been recognized as the ultimate high ground, providing tremendous strategic advantage across domains. Expanding upon the last NDS’ initiative to build a more lethal force, the new USSF is organized across the combatant commands, as well as the intelligence community and nonmilitary defense sectors as outlined in the recent National Space Policy. To best prepare the USSF to protect the expansive interests encompassed by space, the next administration must bolster existing space capabilities and expand resources for space integration across the Joint Force.

In acquiring novel capabilities, the USSF must look back and forward. The space force can draw from existing warfighting concepts through understanding the paths of the older military services. Just as one of the founders of the U.S. Air Force Brigadier General William Mitchell pioneered the concept of airpower, the Space Force must remove barriers and empower the front-line guardians that best understand how to utilize space power across the spectrum of conflict. While certain lessons from the past are relevant, the USSF is operating in a very different environment. Space war has no historic precedent and the U.S. military has insufficiently analyzed the coming decades of space warfare. The USSF must wargame to understand novel warfighting obstacles such as the impact of three-dimensional space and time and the role of commercial actors.

USSF Chief of Space Operations General John Raymond has stated that partnerships are invaluable in the space realm. The second line of effort in the 2018 NDS, strengthen alliances and attract new partners, has been recognized by some experts as the strategic center of gravity for U.S. defense.

The USSF can be instrumental in fortifying the NATO alliance, listed as a key priority in the 2018 NDS. Space underpins NATO’s ability to navigate and track forces, to have robust communications, to detect missile launches, and to ensure effective command and control. In December 2019, NATO declared space an operational domain, focusing on interoperability enabling military operations rather than denying space adversaries. Meanwhile, the United States took a more offensive approach by establishing the USSF while former President Donald Trump described space as “the world’s newest warfighting domain.” The U.S. Space Force should incorporate NATO partners in space capability development to procure interoperability in the future.

To reform the department for greater performance and affordability, the Department of Defense can raise the newest military force as an example from the beginning. The USSF has an excellent opportunity to drive change across the entire department as it identifies roadblocks in talent management, human capital development, and acquisition and procurement processes. Similar to the U.S. Air Force “Accelerate Change or Lose” approach to reassessing organization for enhanced agility, the USSF can build innovation into its blueprint.

To truly achieve innovation, the USSF must welcome new stakeholders. One aspect of growth will be dependent on diversifying acquisition and procurement. Emulating the U.S. Air Force Small Business Pitch Day, the USSF invited small businesses to Space Force Pitch Day in March 2020 to pitch new technology concepts for the USSF’s most critical challenges. The USSF should host similar events in the future and welcome new minds to question old ideas. Equally important to fostering innovation will be creating a personnel model that incorporates diverse backgrounds and experiences, and encourages an environment where “outside the box” ideas are heard. The USSF plans to take a broader look at the talent pool, especially pushing for more minority and women recruits. The Space Force will seek different types of people, in different places, and with different skill sets to “build diversity and inclusion into [their] ‘cultural DNA.’”

In just over a year of operations, the U.S. Space Force has proven that it will be a formidable force and key to the future defense of our nation. Responding to the previous NDS, the USSF supports the Joint Force, expands the NATO partnership, and provides a model for departmental reform. To develop novel capabilities, better incorporate NATO members in future operations, and organize for innovation, the next NDS must make space a top priority in the Defense Department’s blueprint.

As the Space Force surpasses its first year of existence, the next NDS must recognize that space operations are critical to reaching resolutions in the years to come. In the new year, most New Year’s resolutions flop soon thereafter. In the defense world, with a constantly evolving threat environment, initiatives and goals set for a longer period must remain up to date. The U.S. military cannot afford to let its nascent space force stagnate for even a moment as other actors on the world stage pursue their own advanced space capabilities.

Julia Siegel is a Young Global Professional for Forward Defense at the Atlantic Council’s Scowcroft Center for Strategy and Security. She graduated from the University of Virginia with a Bachelor of Arts in public policy and leadership.

The views expressed in this column are the authors’ own. Continue engaging with the Atlantic Council’s Scowcroft Center for Strategy and Security’s Forward Defense Initiative during their public launch event of “The Future of US Security in Space” space strategy paper on April 12, 2021.