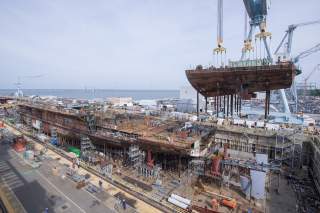 President Donald Trump and his Department of Defense have issued a new report, “Assessing and Strengthening the Manufacturing and Defense Industrial Base and Supply Chain Resiliency of the United States” that seeks to identify areas of weakness and make recommendations about paths to regain strength within the nation’s manufacturing sector.  In issuing this report, which some might criticize as an attempt to manage a portion of the nation’s economy, President Trump has taken a page from two of his most illustrious predecessors.

Franklin D. Roosevelt saw World War II coming. Despite the nation’s desire to avoid entanglements in foreign wars, it nonetheless began to rearm itself prior to its entry into the war. In 1938 and twice in 1940, legislative acts authorized not only the construction of ships but also a significant numbers of aircraft to go with them. At the beginning of the war the U.S. Navy had 790 ships, which was twice as many as it had just three years earlier. Four years later, as the war came to an end, the nation’s shipbuilding industry had built an unprecedented 6,768 ship Navy—the largest the world had ever seen. At one point, the multitude of U.S. shipyards were producing a new warship every week.

Aviation production experienced a similar revolution. In an effort to build more fighters and bombers to defeat Germany and Japan, entire car factories were converted over to aircraft production. The Willow Run plant near Ypsilanti, Michigan, which built the B-24 Liberator bomber, produced a new aircraft every fifty-nine minutes at peak capacity. In the case of ships and aircraft, as well as with tanks and artillery tubes, the Federal government stepped in to allocate resources and manage the nation’s wartime industrial base.

A decade later, at the dawn of the Cold War, President Dwight D. Eisenhower convened what came to be known as the “Solarium Project.” Three teams of distinguished defense experts were sent to the National War College to consider various strategies for dealing with the Soviet threat. As part of their work, they each considered the underlying economic and industrial factors that would necessarily support their strategies. The resulting team debriefs to President Eisenhower helped to build a national consensus around the strategy of containment codified within National Security Council Policy Paper 162/2, which detailed a long and specific list of recommendations for the dispersal of the nation’s defense industrial base. Eisenhower sought to ensure that the nation would be able to defend itself even if a region of the nation suffered a nuclear attack. From a historical perspective, it is clear that in a time of conflict, competition or crisis, the government has a role in ensuring that the nation’s defense industrial base is strong and resilient.

It is from this perspective that the Trump administration report on the defense industrial base can be viewed with welcome. The current strategic picture it paints is one of stark industrial fragility, of tremendous contraction over the past generation, and of an over-dependence on foreign suppliers—especially China. The report points out that manufacturing jobs, which are some of the highest paying in the United States, represented thirty percent of the nation’s workforce in 1950 but only ten percent today. The perception of an “End of History” following the fall of the Soviet Union lured the nation into a strategic vacation. A famous “Last Supper” amongst defense leaders from government and industry in the early 1990s led to a strategically disastrous contraction and consolidation within the defense industry. The White House’s report reveals that between 2000 and 2010, while the nation was fighting two counter-terrorism wars overseas, the United States lost 66,000 manufacturing facilities domestically. The shipbuilding sector alone lost 20,500 sub-component suppliers as the Navy fell from 350 to 282 ships over the past twenty years. This resulted in a narrowing of the competition (and raising prices) while also restricting capacity. The net result is the present real constraint on the nation’s goal of building a 355 ship Navy.

Perhaps most disturbing are the single point of failure examples. For instance, the nation is dependent upon one single supplier for all of its artillery and mortar tubes. This supplier is, in turn, dependent upon just two suppliers of the special steel alloy required for its products—one of which is a foreign foundry. Steel tariffs are unpopular amongst proponents of free trade, but aircraft, tanks, surface ships and submarines require special alloys that do not have a parallel commercial market. While an argument has been made that foreign metal manufacturers can supply the necessary materials, recent political and diplomatic disagreements highlight the fact that allies are not above using whatever leverage is available to them to either influence or constrain American options. Dependence upon foreign suppliers extends to China, which produces the chemicals necessary for the production of missile propellants. In addition, the United States is totally dependent upon suppliers in Japan and Europe for carbon fibers essential to the production of missiles, satellites and space launch rockets. From an objective analytical viewpoint, U.S. dependence on foreign suppliers is too broad for its own good in a world characterized by rising great powers and increased strife.

When the United States saw war clouds gathering in the late 1930s and when the darkness of the Cold War fell over the free world in the 1950s, the leadership of the United States acted to ensure unfettered access to multiple redundant sources of critical supplies necessary for its national defense. Eisenhower, for all his subsequent concerns regarding the military industrial complex, understood that aircraft factories and shipyards were as important to the nation’s defense as the bombers and destroyers they produced. It is an especially important point in light of the fact that both the nation’s current National Security and National Defense Strategies bluntly pronounce that the United States has entered into a new era that is defined by great power competitions with Russia and China.  In the case of China, it faces an opponent who seeks to outright supplant it as the leader of the global international system.

Given the level of the challenge, it is proper that the United States government take an active role in encouraging the growth of and pointing a strategic direction for the nation’s defense industrial base. It is also appropriate to ensure that the nation will be able to draw upon a diversified competitive defense manufacturing sector to execute its national security policies without undue reliance on foreign suppliers who might seek to constrain U.S. options by suddenly restricting access to critical components. Much as Franklin D. Roosevelt and Dwight D. Eisenhower before him, President Trump has pursued a strategically wise course of action in attempting to guide the defense industrial base towards a more robust future.

Dr. Jerry Hendrix is a Vice President with the Telemus Group, a national security consultancy. He is a retired Navy captain.