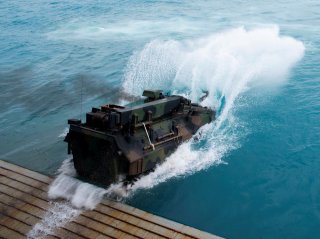 As America’s force-in-readiness, the Marine Corps is expected to do it all. They thrive in austere environments and can leave at a moment’s notice. The Corps has always operated in close coordination with the Navy and the two branches enjoy a very close relationship.

Despite their long history working together, the today the Corp is perhaps best known for their bloody island-hopping campaign of World War II renown. During that conflict, the venerable Higgens boat—a light-weight troop transport of mostly wooden construction—ferried Marines into beaches throughout the Pacific.

Though military technology has significantly progressed since the mid-1940s, the Marines current ship-to-shore vehicle is actually in some ways inferior to the distantly-related Higgins boat.

The AAV entered service with the United States Marine Corps in the early 1970s. It was intended to provide Marines with a shorter ship to shore time and to give Marines a degree of protection while on land. It was therefore equipped with a .50 caliber heavy machine gun and a 40-millimeter automatic grenade launcher.

AAVs launch from the well decks of Navy amphibious ships, literally driving off the ship’s edge and into the sea toward land. They are normally operated by a three-man crew and can carry twenty-one full-armed Marines. Though decently well-armed, the Assault Amphibious Vehicles aren’t very fast—and in some cases may have even been slower than the Higgins boat! As a result, several attempts have been made to replace them.

The Amphibious Combat Vehicle, or ACV, is a USMC initiative that supersedes the now-cancelled Expeditionary Fighting Vehicle program in developing an AAV replacement. This multi-phase effort uses several various wheeled prototypes to explore different platforms and their capabilities, with the goal of eventually giving the USMC a faster, more survivable platform for ship-to-shore operations. It is a long-overdue project, as the AAV is gaining notoriety for the dangerous incidents it has been involved in.

Most recently, an AAV sunk during a training exercise off the coast of California near Camp Pendleton, causing the deaths of seven Marines and one Sailor. Though the investigation into what exactly caused the AAV to sink is ongoing, the aged vehicles have been previously criticized for being leaky. In 2017, fifteen Marines and one Navy corpsman were injured when their AAV caught fire during another training exercise, also at Camp Pendleton.

Speaking to reporters at a news conference, Lieutenant General Joseph Osterman explained that the Corps has squeezed out all the useful life they can out of this platform, saying that the “AAVs were originally procured in 1972 but they’ve gone through many service life extension programs. They bring it in, they literally bring it down to just the hull and rebuild everything inside of it. We’ve done that multiple times through the years.”

It is time to mothball the Assault Amphibious Vehicle. After nearly fifty years of continuous service, the Corps deserves a replacement.