The Marine Corps’ Expeditionary Fighting Vehicle Was Incredible. Why Did it Fail? 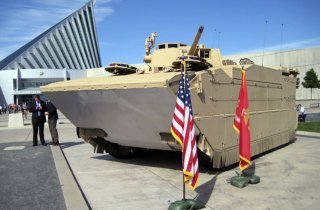 The Expeditionary Fighting Vehicle’s origin story begins in the 1980s when the Marine Corps sought a replacement for their aged Assault Amphibious Vehicle. During that decade, the Marine Corps recognized that future amphibious assaults would have to cover increasingly longer distances from ship to shore in order to keep amphibious assault ships and other large Navy vessels away from shore-based anti-ship fire.

The AAV, used exclusively by the United States Marine Corps, was seen as deficient in both top speed and range when in the water. It would be unlikely to survive the journey at sea and reach the beach unscathed. It needed replacing: and the Expeditionary Fighting Vehicle was to be the Marine Corps’ chariot at sea.

Marine Corps specifications were incredibly stringent. In the water, the EFV was to have a top speed of over twenty-five knots, a powerful 30-millimeter main gun in a stabilized turret configuration, and the ability to keep pace with the M1 Abrams main battle tank on land and have a range of over five hundred kilometers. And in addition to a three-man crew, the Corps specified that the EFV has sufficient onboard space for seventeen fully-armed Marines. For comparison, the Navy’s Arleigh Burke-class destroyer, the backbone of the Navy, is just over thirty-one knots.

Like most other amphibious vehicles, the EFV could transition from land to water remarkably quickly. Unlike many other amphibious vehicles, however, the EFV did not simply chug along slowly through the water. Using a large deployable bow flap and two water jets at the vehicle’s rear, the EFV could in theory fly over the water at incredibly high speeds. Despite these promising characteristics, the project was doomed.

One of the crucial political developments that served to sink the Expeditionary Fighting Vehicle project was the grinding land campaigns that defined the United States’ post–9/11 involvement in the Middle East.

Though the Expeditionary Fighting Vehicle was indeed designed to both keep pace with other, larger armored vehicles, it had not been built from the outset to withstand the increasingly large and sophisticated improvised explosive devices employed by insurgent forces in both Afghanistan and Iraq. Like many other American vehicles, the EFV would have to be up-armored to better cope with the IED challenge, significantly increasing the vehicle's weight and virtually negating the vehicle’s aquatic capabilities.

Additionally, the EFV was simply put, a prodigious engineering challenge. In order to balance lightweight for sea-skimming with significant armor protection, significant adjustments and redesigns had to be put into the design. Ultimately the Marine Corps axed the EFV due to unreliability both in the water and on land—breakdowns became an all too familiar occurrence. Ballooning costs didn’t do the program any favors either.

Despite the EFV’s failure, the Marine Corps has finally begun fielding an Assault Amphibious Vehicle replacement, the Amphibious Combat Vehicle.