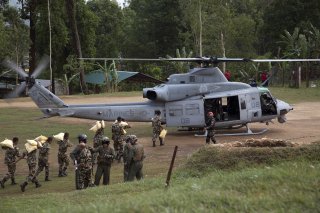 The U.S. Marine Corps is assessing what it needs to replace its extensive rotary wing aircraft fleet in the future as part of the Corps’ Future Vertical Lift program.

“Looking at everything that we think is going to need to take off or land vertically and operate beyond 2030,” he said, according to USNI News. “So vertical take-off and landing, or VTOL family of systems – because what it does is it creates more of an umbrella program that things like a future [UH-1Y Venom] replacement, although again getting those capabilities once those platforms are end of life – but it also encompasses things like large unmanned logistics system airborne.

“As we look at the distances that we’ve got to cover out in the Pacific, you know to have something unmanned that can do very repetitive work, risk-worthy, but over long distances and at an airspeed that’ll make a difference on the battlefield, that may be actually a priority for us over an H-1 replacement.”

The Marine Corps is still taking deliveries of the last UH-1Y Venoms it purchased in the 2000s.

Tiltrotors can fly faster and farther than traditional helicopters.

The Navy would also like a Future Vertical Lift solution. While that could put the Navy program at odds with the Marine Corps’ efforts, the Marines anticipate a significant amount of overlap between the two branch’s programs in terms of capability requirements.

“What we’re finding right now is that the technologies that both of us are going to need to be able to, you know, again – take off and land vertically, go farther than the [MH-]60 and an H-1, go faster – there’s a lot of shared technology that we’re going to see there,” Mowery said.

“And those aircraft and those platforms are going to have to operate in the same battlespace. So we’re going to have to be connected to the same network. We’re probably going to be able to share a lot of the software and the boxes and the things that are going to enable those capabilities. So again, short answer, we’re – if we’re not tied at the hip, we’re working through the same channels.”