The Marine Corps Is Getting Rid of Its Tanks (The Reason Is China?) 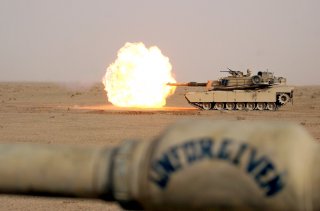 The Marine Corps is divesting its fleet of tanks as part of a strategic and tactical shift toward a more sea-based, multi-domain, and amphibious approach to keep pace with growing Maritime threats and be positioned to respond to contingencies involving island chains, coastal areas, and other kinds of integrated land-sea-air operations--challneges that clearly involve possible China contingencies.

Abrams tanks, while considered crucial to land war operations, are difficult to deploy and often take time to transit. While the Corps’ new ship-to-shore connectors are able to transport 70-ton Abrams tanks from ship-to-shore, it will still be difficult to mass Abrams tanks in sufficient numbers for any kind of amphibious assault, and they of course lack the speed and mobility to keep pace with tactical vehicles or wheeled combat vehicles once ashore.  Accordingly, as part of a decided effort to migrate the service toward more expeditionary, cross-domain combat operations, the Corps is pushing up the numbers of its new fleet of arriving Amphibious Combat Vehicles, a move which Navy leaders say does relate to service plans to divest tanks.

“The plan for the ACV is to increase the buy from 72 to 92 vehicles in FY 22. And so the tank divestiture is a piece of that. However, I wouldn't say that is the only piece of that,” Deputy Assistant Secretary of the Navy for Budget Rear Adm. John Gumbleton told reporters, according to a Pentagon transcript.

The ACV is an armed 8X8 wheeled combat vehicle designed in part to improve land-attack maneuverability and extend amphibious assaults further inland. A key part of this evolving strategic push is also related to the advent of more lightweight, transportable munitions such as anti-tank weapons increasingly able to integrate with fast-moving vehicles. What this means is that the Corps can still operate with heavy, anti-armor firepower, yet do so faster in a more agile, deployable and expeditionary fashion. Part of this concept of operation is also quite likely related to the advent of the F-35B which offers 5th Gen close air support to amphibious forces over land or sea, something which, when combined with new kinds of land-sea-air multi-domain network connectivity, brings massive advantages such as firepower and surveillance technologies to amphibious assault.

The new ACV configuration is aligned with an emerging Navy-Marine Corps amphibious assault strategy which, among other things, sees a possible need for extended penetration into land defenses after an initial beachhead is taken. Yet another aspect of this is that the ACV is specially engineered for improved land attacks to enable more rapid advances for attacking amphibious forces while awaiting further reinforcement.