The Marine Corps on Its New Sniper Rifle: “After the first day on the range, they were sold.” 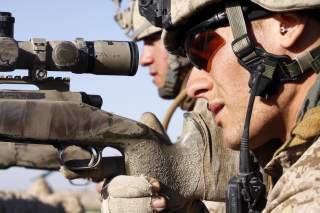 It’s official: a few lucky Marines can finally count the Mk 13 Mod 7 — the Corps’ first new sniper system since the adoption of the M40 during the Vietnam War — among their arsenals, Marine Corps Times reported.

- Marine Corps Systems Command spokeswoman Barbara Hamby told Marine Corps Times that a handful of 1st Marine Expeditionary Force units, including “infantry and reconnaissance battalions and scout sniper schoolhouses,” received the Mk 13 this week, and there are plans to field the rifle to II MEF and II MEF units through 2019.

- Chambered in .300 Winchester Magnum, the Mk 13 is effective at well over 1,000 yards, far outstripping the range of the Vietnam-era M40 that service members have long complained was lacking for combat troops engaging militants across the sprawling mountain ranges and deserts of Afghanistan and Iraq.

- “The .300 Winchester Magnum round will perform better than the current 7.62 NATO ammo in flight, increasing the Marine Sniper’s first-round probability of hit,” said Chief Warrant Officer 3 Tony Palzkill, Battalion Gunner for Infantry Training Battalion in a press release. “This upgrade is an incredible win and will allow snipers to engage targets at greater distances.”

- Already the sniper system of choice for MARSOC Raiders, the Corps first announced the adoption of the Mk 13 in April amid a major makeover for the Corps’ precision weapon capabilities, including ongoing testing and evaluation of the M38 variant of the beloved M27 Infantry Automatic Rifle for squad designated marksmen.

- The MK 13 proved a big hit with Marines tasked with testing the system, who called it an “incredible win,” Business Insider reported back in May. As one project officer put it: “After the first day on the range, they were sold.”

Why the Army's M17 Pistol Could Be a Total Game Changer