The Marine Corps Is Testing Expeditionary Based Operations for Pacific War 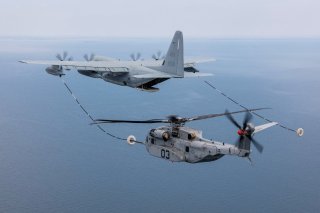 The Marine Corps is testing a radically new operation concept on a remote Pacific island to evaluate how effective they can fight—and win.

The Marine Corps’ new operational concept directs the Marine Corps to move away from a centralized logistics and operation system to a distributed one that is more challenging to target. Called Expeditionary Advanced Base Operations, the concept is still in its infancy, and the Corps is putting it to the test.

A statement from the Marine Corps explained that “3rd Battalion, 7th Marine Regiment, MRF-D Marines and Sailors traveled from Darwin to South Goulburn Island in the Arafura Sea and conducted a series of force-on-force events to simulate seizing and holding key terrain in an expeditionary posture.”

It added that “the exercise force included the 3/7 Marines and Sailors along with a low altitude air defense platoon [LAAD], an electronic warfare section, a water purification team, and other enablers to reinforce and sustain the team.”

“EABOEX started with a company air assault to seize key terrain which allowed LAAD to establish coastal air defense,” said Capt. Erik Glynn, the India Company Commander and officer-in-charge of the exercise force for EABOEX, in the Marine Corps statement.

While the Expeditionary Advanced Base Operations concept is still being tested and refined, the recent exercise will contribute to an EABO manual. “While official doctrine is still under construction, MRF-D utilized concepts laid out in the tentative manual for EABO to conduct the exercise. With the intent to maintain a low-signature, easily-sustained force capable of conducting area denial, the MRF-D team established a security posture on the remote Australian island following an MV-22 insert,” the Marine Corps statement explained.

“EABO support the projection of naval power by integrating with and supporting the larger naval campaign,” reads the tentative manual for EABO. “Missions of EABO include to support sea control operations, conduct sea denial operations within the littorals, and contribute to maritime domain awareness.”

In addition to sea denial and air denial, the exercise offered an ideal environment to practice communications and logistics at range while maintaining a low signature with minimal support. “South Goulburn Island, located approximately 170 miles from Darwin, maintains extremely limited infrastructure as the island is only home to a population of 450, and offered the perfect training area to establish logistics and communications lines of support under remote conditions,” the Marine Corps explained.