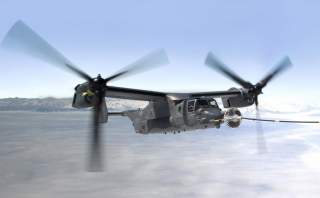 Key Point: The Osprey is, among other things, known for its ability to reach speeds of 280 knots and achieve a much greater combat radius than conventional rotorcraft.

Bell-Boeing designed a special pylon on the side of the aircraft to ensure common weapons carriage. The Corps is now analyzing potential requirements for weapons on the Osprey, considering questions such as the needed stand-off distance and level of lethality.

"We did a demonstration with Bell where we took some rockets and we put them on a pylon on the airplane using APKWS. We also did some 2.75 guided rockets, laser guided weapons and the griffin missile. We flew laser designators to laser-designate targets to prove you could do it," Rick Lemaster - Director of Business Development, Bell-Boeing, told Scout Warrior in an interview.