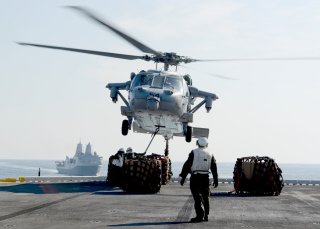 If a conflict between China and the United States were to break out, China would pose a significant threat to the Marine Corps' logistics and command and control nodes.

“I think logistics in a contested environment is a huge challenge for us,” Commandant of the United States Marine Corps Gen. David Berger explained during a talk with the Hudson Institute. “Not insurmountable, but we need to acknowledge that we should assume…they're going to challenge our sustainment. We have work to do,” he added.

More specifically, Berger explained that the Marine Corps has to take a “real relook at everything from pre-positioning ashore to pre-positioning afloat to the lift that conventionally has gone across the ocean through this solid protected pipeline delivered in some big port."

In the future, the Marine Corps will not be able to rely on large ports for storing supplies, ammunition, and material.

Large ports are “not how we're going to need to think about it going forward because I think realistically they're going to challenge us back in our port or beyond,” Berger said. "They're going to try to slow our mobilization. They're going to do everything that they can to slow us down as far back as possible. Sustainment is a huge challenge,” he added.

In addition to logistics and supplies, the Marine Corps can expect command nodes to be targets as well.

“We should assume that on both sides we're going to try to go after soft spots early on. You would go after command and control because you would think they rely on it so much that if I can just interdict that, if I can hurt their command and control, we can start to have a more of a fair fight,” Berger warned.

Berger’s comments build upon his Force Design 2030 operating concept, a force structure plan radically different from the Corps’ current force structure. In a future fight in the Pacific, Berger anticipates that many small groups of hyper-decentralized Marines will prowl throughout the Pacific, in something of a throwback to their island-hopping campaign during World War II.

Drawing on prepositioned supplies, forward-based Marines would deny Chinese warships access to islands and other strategic areas with an array of precise, long-range advanced weaponry. But keeping Marines equipped with adequate supplies in the Pacific won’t be easy.

The latest edition of the Marine Corps’ Force Design 2030 document acknowledges that “to persist inside an adversary’s weapons engagement zone, our Stand-in Forces must be set and sustained by logistics capabilities designed for distributed operations over long distances in a contested environment.”

One solution could be the Light Amphibious Warship, an inexpensive vessel that compliments the Corps’ larger warships. It would ferry small groups of Marines throughout the Pacific, as well as their ammunition, food, and equipment. Still, the challenges to Marine Corps logistics and sustainment in the Indo-Pacific are significant.