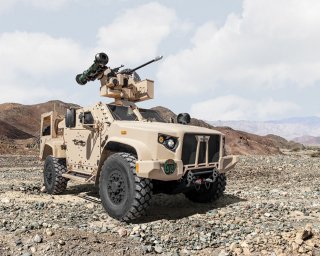 According to a notice, the U.S. Marine Corps would like to equip some of their Joint Light Tactical Vehicles (JLTV) with a 30mm chain gun to give better protection from air attack. The gun, called XM914E1 by the Corps, is chambered in the large 30mm x 113mm cartridge (or rather, shell), and would pack a prodigious punch. The notice states that both proximity rounds— essentially a 30mm high-velocity shotgun shell—and self-destruct rounds would be available. The latter round explodes before falling back to Earth, ensuring that nothing on the ground is damaged.

Though the notice specifically mentions the system being used to protect from “Unmanned Aerial Systems (UAS) and Fixed Wing/Rotary Wing (FW/RW) aircraft,” it could presumably also be used for land-based targets. It is apparently the only weapon system that fulfills the Corps’ requirements and provides a “readily available, non-developmental solution that can be integrated within the size, weight, and power parameters of the Remote Weapon Station (RWS) on the JLTV Heavy Guns Carrier (HGC).”

The new chain gun will make up part of the Corps’ Marine Air Defense Integrated Future Weapons System, an initiative that aims at modernizing the Corps’ low-altitude defense capabilities. In addition to Stinger missiles, 360-degree radar, and an electronic warfare capability, the MADIS system includes a “direct fire weapon,” thought to be the new 30mm chain gun for keeping Marines safe from air threats.

Once integrated, the 30mm gun would offer the JLTV a huge firepower increase, but it is not the first modification to the JLTV platform that the Marine Corps is pursuing.

One of the other Marine Corps JLTV modification projects would see the vehicle equipped with the Navy’s new Naval Strike Missile. The project, called NMESIS by the USMC, would remove the JLTV’s cab space to create extra space for Naval Strike Missiles—and it would be remotely operated, providing Marines with a highly maneuverable—and risk-free anti-ship capability.

Unlike the Marine Corps’ current HIMARS rocket artillery system, the sea-skimming NSM can hit moving targets and is highly maneuverable, especially during its terminal phase, adding lethality to the platform.

It’s too early to know what exactly a JLTV with a 30mm cannon mated to its roof would look like. But one thing’s for certain: The Marine Corps is making a big push to protect against UAVs—and to squeeze as much capability as possible from the Joint Light Tactical Vehicle. Watch this topic closely for further future developments.