The Marines' Amphibious Combat Vehicle Heads Back to Sea 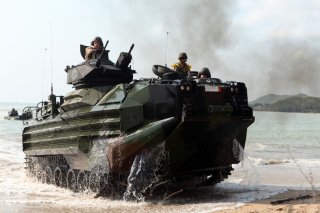 The United States Marine Corps’ (USMC) new Amphibious Combat Vehicles (ACVs) will receive new tow ropes, a badly-needed fix that will allow the newest vehicle in the Marine Corps’ inventory to take to sea once again.

The information came to light during the annual Navy League symposium.

The Marine Corps realized that the tow ropes lacked the elasticity necessary to tow another vehicle under load. During bumpy and irregular towing in the water, the ropes were prone to permanent deformation because they lacked stretchiness.

Rather than lengthening under load and contracting when released, the ropes would sometimes stretch and not return to their original length or snap while under load.

The Marine Corps’ immediate fix for this problem was to keep the Amphibious Combat Vehicles out of the water, though the service later approved them for operations in calmer, protected waters, but not within deeper and more chaotic surf zones.

Jane’s reports that the “service and prime contractor BAE Systems then tested out the tow rope material change in “operationally relevant environments” (which are, protected waters, open ocean, and the surf zone) in December 2021 to confirm that the problem had been solved.”

Barb Hamby, the program executive officer for land systems and spokesperson for the USMC, told Jane’s that “revised tow ropes are being provided to all fielded units. Vehicles equipped with the revised tow ropes are authorized to tow in the water without restrictions.”

The ACV replaces the USMC’s Assault Amphibious Vehicle, a 1970s-era tracked vehicle designed to get Marines from ship to shore. Though the AAV was certainly a capable vehicle when it was first introduced into service, it may not be as survivable against modern threats.

Late last year, an AAV sank off the coast of California during a routine water exercise. Thirteen Marines and a sailor went down with the vehicle and drowned. Following the incident disciplinary action was taken against AAV officials and the vehicle was permanently suspended from water operations.

Though the tow rope issue proved to be a headache for the Marine Corps, especially during a critical period of training with the new vehicle, the fix allows the ACVs to go back into the water and allow Marines to get in valuable practice time.