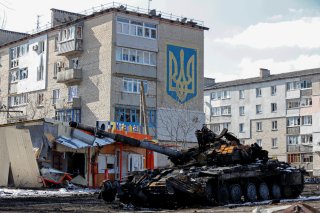 The AP has presented newly uncovered evidence to suggest that the Mariupol theater bombing was deadlier than previously believed.

Russian forces have been accused of bombing a theater in Mariupol that was being used as a civilian shelter on March 16. According to early estimates by Ukrainian officials, around 300 people died in the attack. However, a recent AP investigation has concluded that the actual death toll was significantly higher.

The AP said that it was able to recreate the bombing based on accounts of twenty-three survivors, two sets of floor plans, and photos and videos taken before, during, and after the attack. The AP aggregated this information to create a 3D model of the theater. “Witnesses and survivors walked the journalists through the building virtually on the floor plan, pointing out where people were sheltering room by room and how densely crowded each space was,” read the AP’s explanation of its methodology. The AP concluded from eyewitness accounts that the building housed about one person for every three square meters of free space in the rooms and hallways. Most witnesses said that around 1,000 people were in the theater at the time of the attack, with no one reportedly seeing more than 200 people escape alive. The initial government estimate of 300 deaths was based on the claims of two witnesses, as well as a lack of bodies. But in light of the accounts of most of the witnesses it interviewed, the AP has concluded that closer to 600 died. According to the report, the bodies were either “pulverized into the dust” or removed by the Russians in the aftermath of the attack.

The Kremlin has denied responsibility for the attack, with Russian-aligned separatists claiming instead that the theater was demolished from the inside by the ultra-nationalist Azov battalion.

"Judging by the character of the explosion, it can be said quite confidently that the blast occurred inside the building,” claimed Yuri Bukharev, a spokesman for the People’s Militia of the breakaway pro-Russian Donetsk People’s Republic.

“I spoke with an eyewitness, who said that no planes flew over the area before the explosion, neither were there any shelling attacks. At the moment of the explosion, he was standing with his back to the theater and was thrown four meters ahead. It means that the explosion was very powerful and originated from inside," Bukharev claimed. Kremlin officials previously claimed that Azov fighters blew up the building in an attempt to frame the Russian military.

The AP said that its investigation refutes Russia’s claims. The report found that none of the witnesses saw Ukrainian forces operating inside the building or doubted that the theater was destroyed by a Russian airstrike. Kyiv has since opened a war crimes investigation into the attack.