Massachusetts Legislators’ Rush to Judgment on Vaping Will Cause More Harm 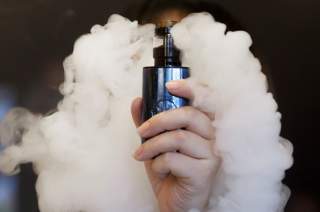 Reacting to a media-fueled panic surrounding teen vaping, Massachusetts legislators this week banned the sale of all flavored e-cigarettes, including menthol, and levied a 75 percent excise tax on vaping products. This was portrayed as “a forceful response to an epidemic in which one out of every five Massachusetts high-schoolers use e-cigarettes.” In reality, it is an impulsive act that ignores the evidence and endangers public health.

Numerous scientific studies show that vaping is a very effective way to help tobacco smokers quit smoking. And while vaping might not be completely harmless, tobacco smoking is a proven killer. According to Public Health England e-cigarettes are “95 percent less harmful” than tobacco cigarettes. And research finds e-cigarettes are “twice as effective” as nicotine patches or gum in helping smokers quit.

There were an estimated 11 million vapers in the U.S. in 2018, and as of late November there have been an estimated 2,172 cases of vaping-related illnesses with 44 deaths reported. For perspective, the Centers for Disease Control and Prevention states 16 million Americans live with tobacco smoking-related illness and 480,000 die annually.

Interestingly, vaping-related lung injuries have not been reported outside of the U.S. This raises the question of whether the outbreak might be an unintended consequence of public policy.

Germane to that question, the CDC reported earlier this month the results of tests on 29 randomly collected samples of lung fluid in patients hospitalized for vaping-related illness. All 29 samples contained vitamin E acetate, the synthetic form of vitamin E. Vitamin E acetate is an oil, and is suitable for ingesting, but can cause severe lung damage if inhaled.

Vitamin E acetate is commonly used as the vehicle for delivering THC, the psychoactive ingredient in cannabis, in vaping cartridges. The CDC reported that 86 percent of the patients sampled said they had vaped an illegal THC product. This was based upon self-reporting, so the actual percentage may be higher.

Vitamin E acetate is not used by legal e-cigarette cartridge makers because of its harmful effects on the lungs. Its presence in vaping liquid indicates a black-market source.

As long as federal marijuana prohibition continues, the only way for vapers to get THC-containing liquids is by making them on their own with cannabis products or buying them in the dangerous black market.

Commenting on the CDC test results, Professor Siegel stated, “states which have issued emergency regulations to ban e-cigarettes or flavored e-cigarettes are not justified in using their emergency powers for this purpose since it is almost assuredly the case that those store-bought products have nothing to do with the outbreak.”

A ban on flavored vaping not only harms adult tobacco smokers wishing to quit. It also harm teens.

It has been federally illegal to sell e-cigarettes to persons under 18 since 2016. Yet teens manage to obtain e-cigarettes and cartridges. Oftentimes they obtain bootleg products on the black market made with dangerous substances such as vitamin E acetate. The Drug Enforcement Administration recently reported that the Mexican drug cartels are getting into the bootleg vaping business, and some of their products are laced with illicit fentanyl. An outright ban on the sale of legally produced vaping cartridges can only make matters worse.

This article by Jeffrey A. Singer first appeared at The Cato Institute.