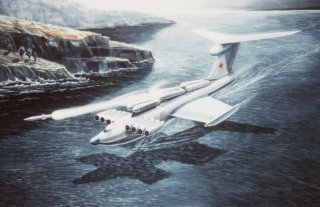 The Cold War was a hotbed for technological weapon advancements. The Soviet Union, like the United States, was dead set on developing superior technology as well as big weapons and vehicles. One of the most fascinating machines built in this era was a behemoth of an aircraft. The Ekranoplan nicknamed the “Caspian Sea Monster,” was a Lun-class aircraft oddly designed for stealth despite its tremendous size. It was also equipped with missiles optimized for seacraft destruction.

The MD-160 or Utka was over 63 feet tall, the equivalent of three two-story houses stacked on top of one another. The overall length is a jaw-dropping 242 feet and an impressive wingspan of 144.4 feet. Predictably, the plane also had a huge carrying capacity, allowing 137 tons of cargo in its body. As you piece this image together in your mind, you may start imagining it in the same light as an AC-130 gunship, but you would be dead wrong. The MD-160 was designed for stealth flight and due to its massive size, it was unable to reach high altitudes like the SR-71 or B-2 Spirit. Instead, it would skim a mere 13 feet over the surface of the ocean.

This was achieved by utilizing an air cushion between the ocean and the plane allowing it to just glide along the surface. The general idea was that the craft would be flying low enough to avoid radar detection from opposing naval vessels. In other words, it was literally flying under the radar. It was an ideal tool for hunting down ships like aircraft carriers and other military vessels as a result. This entire package was powered by 8 Kuznetsov NK-87 turbofans.

The crew size is surprisingly small, with only 6 officers and 9 crewmen. It’s quite an impressive feat to control such a beast with a minimally sized operating crew.

The Utka had some nasty weapons too. It came equipped with six missile launchers, all carrying P-270 Moskits, or Mosquitos in English. These rockets were supersonic anti-surface warfare cruise missiles, meaning they were specifically designed to take ships down. A guidance system was included as well as tracking systems in both the tail and nose of the aircraft. The MD-160 wasn’t only equipped with rockets though, it also came with two 23mm Pl-23 cannons.

Only one MD-160 was ever actually built and used. The Soviet Union first used it in 1987 and continued to use it until the late 90s. A second was in the process of being built but was changed to be a mobile hospital called Spasatel, or Rescuer. United States defense officials were anxious about the development and use of the MD-160, stating that the plane would “add a new dimension to naval warfare.”

Despite all the hard work of its creator, Rostislav Alexeyev, the entire project was shut down in the late 1990s before the second ship ever reached completion. Russian officials have said that the development was halted due to a lack of funding, a similar story to many weapons programs as the Soviet Union was dissolved.

The U.S. Navy Tried to Create a Far-Out Seaplane Strike Force (To Wage A Nuclear War)