A Match Made in Vahalla: This Drone and Missile Pose a Real Threat to China's Warships 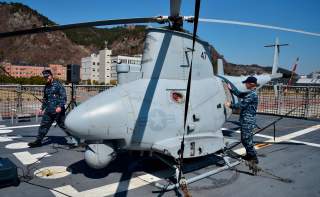 HONG KONG – Somewhere in the Pacific, a stealthy U.S. Navy warship is carrying new weapons that analysts say could help to tilt the balance of power in contested areas like the South China Sea. CNN reports. Continue reading original article

The sea-skimming Naval Strike Missile is difficult to spot on radar, and can maneuver to avoid enemy defenses, according to Raytheon, the main U.S. contractor for the weapon. It is paired on the Gabrielle Giffords with a MQ-8B Fire Scout unmanned helicopter, which scouts for targets.

The U.S. and China blame each other for the rapid militarization of the South China Sea, one of the most contested areas in the world. Several countries claim parts of the commerce-heavy region, but Beijing's claim is by far the most expansive, covering the majority of the sea.