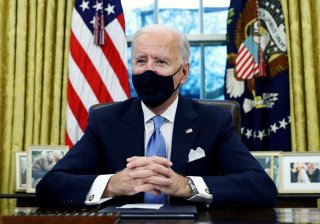 While the United States and Iran engage in shuttle diplomacy to resurrect the 2015 nuclear deal, a fight is brewing in Washington over re-litigating the Joint Comprehensive Plan of Action (JCPOA)—the nuclear agreement between the United States, other major world powers, and Iran—and the Trump administration’s disavowal of that deal in favor of “maximum pressure.” Unless President Joe Biden takes the offensive in the fight, we’ll spoil our chances to restore the JCPOA and risk sidelining his ambitious domestic agenda.

Already, Senate Republicans are honing their lines of attack. In a letter timed to coincide with the launch of negotiations in Vienna, they argued that Trump’s sanctions on Iran have provided “an enormous amount of leverage over the Iranian regime . . . [that] should be used as a tool to address all aspects of Iran’s destabilizing behavior.” They warned the Biden administration “not [to] relinquish its leverage over the Iranian regime just to return to the JCPOA,” and they threatened to undo the nuclear deal once again if given the opportunity in the future.

This knives-out approach should be met in kind by the Biden administration. No effort should be spared pointing out that the net result of President Donald Trump’s decision to pull the United States out of the nuclear deal expanded the Iranian nuclear program; made Iranian proxies in the Middle East more aggressive; and ultimately led to an Iranian missile strike on U.S. military forces in Iraq.

Indeed, Biden’s team should first note that—if the Trump administration had accumulated so much “leverage” over Iran—then why did President Trump fail to cash in on this leverage? Far from eliciting new concessions from Iran with respect to its ballistic missile program or its support for international terrorism, President Trump could not even convince Iran to sit down at the negotiating table with him.

This was not for lack of trying. During his time in office, President Trump did not merely re-impose those sanctions that had been lifted under the nuclear deal but erected an effective international boycott of Iran—isolating, on a global scale, all productive sectors of Iran’s economy, including its oil and financial sectors. By the time his term ended, President Trump had “maxed out” on “maximum pressure,” as there remain few, if any, targets in Iran left to sanction—certainly, none that would cause Iran to capitulate.

The Trump administration’s efforts were not limited to sanctions, either. President Trump sought to block Iranian officials’ travel to the United Nations headquarters in New York and sanctioned the two most senior government officials responsible for negotiating on Iran’s nuclear program—its foreign minister, Javad Zarif, and the head of Iran’s Atomic Energy Organization, Ali Akbar Salehi.

Such efforts to undermine Iranian diplomacy, however, paled in comparison to President Trump’s decision to assassinate Iran’s most senior military commander, Qassem Soleimani. That decision provided a clear indication that the Trump administration was willing to risk—if not keen on starting—a war with Iran.

Subjected to devastating economic pressure and the credible threat of military force, what was Iran’s response? Instead of agreeing to more intensive restrictions on its nuclear program, Iran took measures that limited its compliance with the JCPOA, in direct response to the U.S. withdrawal from the deal. Such measures included developing advanced centrifuges and increasing its production and stock of enriched uranium. From having its nuclear program boxed in by President Barack Obama, Iran started to accelerate its nuclear development under President Trump.

Far from cowering in response to the assassination of General Soleimani, Iran engaged in a large-scale missile attack on American forces in Iraq—the first time Iran had ever initiated military action against the United States. While Iran’s attack did not kill any Americans, it did permit Iran to showcase its ballistic missile force to the United States and the wider region, providing Iran an aura of credibility that its missiles did not otherwise have.

At the same time, Iran showed the extent and influence of its proxies in the region. Rocket attacks on U.S. compounds in Iraq became a regular occurrence—one that led the Trump administration to consider withdrawing all U.S. personnel from the country. Indeed, Iran’s regional activities under President Trump became more aggressive—not less—as Iran launched a daring attack on Aramco facilities in Saudi Arabia and periodically targeted shipping vessels in the Straits of Hormuz.

To sum it up: Under President Trump, Iran’s nuclear program expanded considerably; its regional behavior became less constrained; and its economy started to immunize itself from U.S. sanctions. The notion that “enormous leverage” was handed over to President Biden by the Trump administration is a fiction. In fact, the U.S. negotiating position is weaker now than it was four years ago as many of the instruments of U.S. power, short of war, have been “maxed” out. The best Biden can do at this point is to put Iran back in the nuclear box through a resurrection of the nuclear agreement.

In doing so, however, the Biden administration must be prepared for a political fight. To weather the storm, it will need to make this simple case: The United States was in a better position with respect to Iran when President Obama left office than it is today.

Tyler Cullis is a sanctions and compliance lawyer at Ferrari & Associates in Washington D.C.

Amir Handjani is a non-resident fellow at the Quincy Institute and a security fellow with the Truman National Security Project.