McCabe Backs Down Under Heavy Grilling From Wolf Blitzer 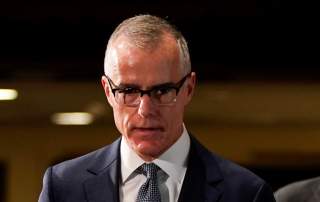 “Jim Comey said it was sloppiness. This wasn’t just sloppiness. These were brutal mistakes, deliberate errors, concealments involving surveillance activities of an American citizen,” Blitzer said to McCabe, a CNN analyst, in the interview.

Earlier on Tuesday, Judge Rosemary Collyer, who presides over the Foreign Intelligence Surveillance Court (FISC), blasted the FBI for providing “false information” in applications to conduct surveillance against Page.

McCabe, who was intimately involved in the investigation of the Trump campaign and signed one of four applications submitted to the FISC, told Blitzer that he was “shocked and horrified” by the report’s findings.

“Shocked because we all believed, I certainly believed that the procedures we had in place were enough to guarantee that accurate information was going to the court and horrified because it cuts against one of our most fundamental duties and that is to be perfectly accurate and truthful and complete with the court at all times,” McCabe said.

But while McCabe accepted the IG’s findings, he stopped short of taking personal responsibility for the misdeeds laid out in the report. Instead, he said that FBI leaderships’ biggest failure was in allowing lower level FBI agents to have control over so much of the investigation.

“What’s the biggest mistake you made?” Blitzer asked.

“The biggest mistake we made,” McCabe began. “The biggest mistake, I think, is the process that was in place essentially left so much responsibility on the lowest level of FBI agents and supervisors involved in a process that once those mistakes are baked in they become very, very hard for the many, many layers of oversight to uncover.”

McCabe’s remarks Tuesday are a stark shift from his comments last week after the report was released. In an interview with CNN’s Chris Cuomo on Dec. 10 , McCabe asserted that the report vindicated him and other FBI officials, such as Comey and former FBI general counsel James Baker.

“I knew that we had not ever done anything wrong, so to see the IG embrace the unavoidable facts of no bias in the investigation, an investigation that was adequately predicated for an authorized purpose, and in fact one that we thought we would be guilty of dereliction of duty had we not begun it, it is satisfying to finally see those words in print,” McCabe said then.

On Sunday, Comey said in an interview on “Fox News Sunday” that the IG report showed he was “wrong” to have asserted in the past that the FBI did not abuse the surveillance process. Baker said on Monday on CNN that he was “distressed” after reading the IG report.