This Means War: How a U.S.-China War Could Begin 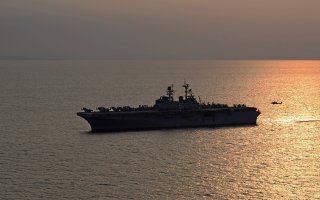 China has warned the Biden administration that its claim to Taiwan was an “insurmountable red line.”

“The Chinese government has no room for compromise or concessions on the Taiwan issue,” China’s Foreign Minister Wang Yi said at a recent news conference. “We urge the new U.S. administration to fully understand the high sensitivity of the Taiwan issue” and “completely change the previous administration’s dangerous practices of crossing the line” and “playing with fire.”

In the uncertain future of the relations between the United States and China, what are the red lines in the other direction,” in terms of action by China to which the United States would have no choice but to react?

Stavridis cited The Atlantic Council’s publication of The Longer Telegram, which noted that:

The Trump administration was frequently combative with China, especially in the area of trade, and many are watching to see whether the Biden administration’s approach is appreciably different.

The Nikkei piece looks at that very question, which states that “at U.S. Indo-Pacific headquarters, strategic, operational and tactical teams are putting together new approaches for deploying American forces.” One of these is the idea of an “enhanced role for the U.S. Marine Corps” when it comes to China.

Stavridis also laid out what a military posture in dealing with China would look like.

“In the context of a U.S.-China strategy, the Marines will be resolutely sea-based and able to sail into the waters of the South China Sea, well inside the island chains China relies on for defense,” he wrote. “Once inside, they will use armed drones, offensive cyber capabilities, Marine Raiders—highly capable special forces—anti-air missiles and even ship-killer strike weapons to attack Chinese maritime forces, and perhaps even their land bases of operations. The Chinese militarized artificial islands in the South China Sea would be juicy targets, for example. In essence, this will be guerrilla warfare from the sea.”

A Collision: Is This How a U.S.-China War in the South China Sea Starts?