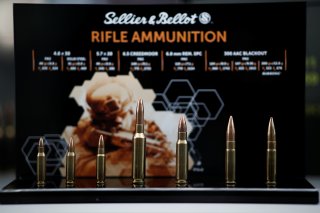 The ammunition shortage that has been affecting hunters and gun enthusiasts for much of the last two years has been reported on frequently, but nearly always by local news outlets, especially in parts of the country where hunting is popular.

So, it’s rare when national media addresses the shortage. But that happened this week when the host of a Netflix series talked about it in an interview with Fox News.

Steven Rinella is the host of MeatEater, an outdoors series that’s been on the air since 2012, including the last five seasons on Netflix. The most recent season debuted on Netflix at the end of September.

In the Fox News interview, Rinella talked about the ammunition shortage. He told the channel that while he personally has been insulated from the shortage, due to his “professional relationships,” he has noticed other issues.

“There are tooling issues as well,” Rinella told Fox News. “(Ammos manufacturers) tool up to run the most high demand stuff and that can create the illusion that they don’t care about certain esoteric calibers.”

He also said in the interview that he believes that the ammunition manufacturers are doing everything they can to make the situation better.

The shortage has been attributed to a variety of factors. Millions of people took up hunting and shooting during the pandemic, while others took up gun ownership following the social unrest in the summer of 2020. Once Joe Biden was elected president, still, others purchased guns in response to fears that new gun restrictions were on the way.

The ammunition shortage has especially made things difficult as hunting seasons have gotten underway in various parts of the country.

Meanwhile, supply has been constrained, both due to the pandemic and also because Remington, a major supplier declared bankruptcy in 2020 and its factories were offline for a time.

More recently, some have criticized President Biden for placing sanctions on Russian-made ammunition, which has the potential to further restrict supply at the lower end.

Those sanctions, announced by the State Department in August, include “restrictions on the permanent imports of certain Russian firearms [and] new and pending permit applications for the permanent importation of firearms and ammunition manufactured or located in Russia will be subject to a policy of denial.” Russia was the top foreign source of ammunition in 2020.

In the interview, Rinella reflected on ten years hosting his show, and also gave advice for those looking to get into hunting, which included joining up with a hunting group.

“People will respect and mentor you," the host told Fox News. "It’s good to get in there and pay upfront as an aspiring conservationist.”