Meet the 29-Ton AAV7: The Marines' New Armored Vehicle That Can Swim 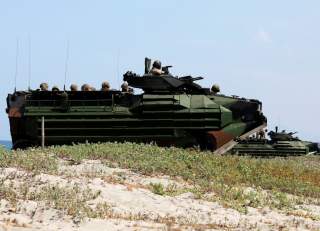 Key point: Washington wants to ensure the Marines have the ability to land on any shore. The new AAV7 is meant to ensure just that.

The U.S. Marine Corps finally is getting new, swimming armored vehicles. Also in the works -- a new strategy for deploying them.

The Marines since 1972 have been using the same amphibious tractor, or amtrac. The 29-ton AAV7 can carry up to 24 crew members and infantry from an amphibious assault ship to an enemy beach over a distance of up to 20 miles.

But the AAV7 is lightly-armored and vulnerable to enemy attack. Fourteen Marines died when a roadside bomb struck their AAV7 in Iraq in 2005. The Marine Corps in the 1990s began developing a replacement vehicle, but in 2012 canceled it on cost and performance grounds.

The new Amphibious Combat Vehicle, a BAE Systems product, finally could allow the Marines to retire the old, thin-skinned AAV7s. The Congressional Research Service on March 15, 2019 updated its ongoing report on the ACV program.

The ACV comes in two models. The ACV Increment 1.1 is a wheeled armored vehicle with limited swimming ability. It requires a landing craft to put it ashore. The ACV Increment 1.2 has tracks and on its own can swim from an assault ship to shore. All ACV models boast tougher armor and better weapons than the AAV7 possesses.

"On June 19, 2018, the Marine Corps selected BAE Systems to produce the ACV. Reportedly, the initial contract—valued at $198 million—will be for low-rate production of 30 vehicles to be delivered by the autumn of 2019," CRS reported. "Eventually, 204 vehicles are to be delivered under the ACV 1.1 phase of the project. BAE will also produce the ACV 1.2 variant and, all told, the entire ACV 1.1 and 1.2 project is expected to deliver 700 vehicles,and, if all options are exercised, the total contract will reportedly be worth $1.2 billion."

According to CRS, ACV 1.1 must accommodate nine Marines and two crew members and have a "robust" "shore-to-shore" -- but not "ship-to-shore" -- swim capability. In other words, it should be able to churn a few miles across the ocean in order to travel from island to nearby island.

The vehicle must be able to operate on land with M-1A1 [tanks] in mechanized task forces across the Marine Corps' mission profile. The vehicle shall provide protection for the occupants from the blasts, fragments and incapacitating effects of attack from kinetic threats, indirect fire and improvised explosive devices and mines. The vehicle shall be capable of firing existing Marine anti-structure and anti-armor missiles and should be able to accommodate existing command-and-control systems.

ACV 1.2, by comparison, "must be able to self-deploy from amphibious shipping and deliver a reinforced Marine infantry squad (17 marines) from a launch distance at or beyond 12 miles with a speed of not less than eight knots in seas with one-foot significant wave height and must be able to operate in seas up to three-foot significant wave height."

The vehicle must be able to maneuver with the mechanized task force for sustained operations ashore in all types of terrain. The vehicle’s road and cross-country speed, as well as its range, should be greater than or equal to the M-1A1. The vehicle’s protection characteristics should be able to protect against direct and indirect fire and mines and improvised explosive device threats.

The vehicle should be able to accommodate command-and-control systems that permit it to operate both at sea and on land. The vehicle, at a minimum, should have a stabilized machine gun in order to engage enemy infantry and light vehicles."

The ACV arrives as the Marines and Navy are developing concepts for fighting a high-tech foe such as China or Russia. The key for the Marines is the Expeditionary Advance Base Operations concept.

"The alternative forward posture enabled by Expeditionary Advance Bases is designed to mitigate the growing threat posed by the abundant quantity, expanded-range and enhanced precision of potential adversary weaponry—particularly ballistic and cruise missiles designed to attack critical, joint, fixed forward infrastructure and large platforms," according to the Navy.

Before, amphibious groups sailed toward an enemy shore under the protection of carrier battle groups and offloaded large, concentrated forces of amphibious vehicles. Under the EAB concept, Marine forces would spread out in order to be harder to target, and will come ashore with more of their own offensive and defensive missiles so that they can protect themselves and contribute meaningful firepower to the overall U.S. force as that force comes together to attack.

A new amtrac with thicker armor and harder-hitting weapons is key to the concept.