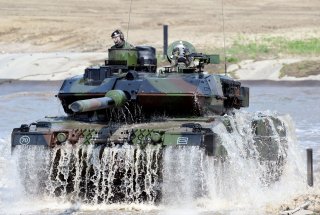 In the 1970s, it became apparent that anti-tank warfare had progressed far beyond the capabilities of 1950s and 1960s era armor. West Germany went back to the drawing board and came up with a winning design—the Leopard II.

The Yom Kippur war in 1973 showed the limitations of 1950s and 1960s tank design when faced with 1970s anti-tank missiles. Israel armor had struggled at the beginning of the conflict, and lost a large number of American M48 Pattons, British Centurions, and other armor to Soviet-supplied anti-tank missiles.

European observers were startled—and realized that advances were needed in armor, quickly. West Germany decided to upgrade their Leopard I to a new standard—the Leopard II.

The Leopard II entered service in 1979, and had a number of improvements and upgrades compared to the Leopard I, its predecessor.

Initially the United States and West Germany planned on jointly creating a tank that would equip both of their armies, the MTB-70. The MTB-70 was incredibly advanced for the time. However doubts concerning some of the tank’s technical advancements, like the redesigned main gun and finicky gas-turbine engine arose, and the entire project was rapidly shelved.

West German designers returned to their current main battle tank, the Leopard I. Their initial goal was to upgrade the Leopard I to try and get close to the capabilities offered by the MTB-70.

Designers took some of the MTB-70’s better qualities—good mobility and effective armor—and created a prototype that had spaced turret armor that was steeply sloped. The prototype’s suspension and transmission were improved as well.

A computerized fire control system for greater hit probabilities at 2,000 meters, or 6,500 feet was added, as was a fully electric turret drive and automatic stabilization.

Ammunition was stored in blow-out compartments too—in case of ammunition “cooking off” after taking a hit. This meant that any resulting explosion would be pushed outwards away from the crew, rather than exploding internally.

Another upgrade meant that ,with minimal preparation, the Leopard II can ford thirteen-foot deep bodies of water using a quick-deploy snorkel. With no prep, it can ford over three feet of water.

The Leopard II was born.

Throughout the life of the Leopard II, incremental upgrades have steadily been incorporated, resulting in many versions of the tank.

To protect against IEDs, improvements to underbelly armor protection has been added to some models, as well as a thicker spall liner to protect the crew. Additionally, a heavy ballistic skirt was added to protect the Leopard’s tracks.

Due to German political sensitivities, the Leopard today does not make use of depleted uranium armor. Instead, the tank relies on steeply sloped armor to defeat projectiles, though it has smoke projectiles along the turret.

The Leopard II was picked up by a number of NATO member countries, including notably by Canada, Austria, and the Netherlands, who contributed Leopard II variants to their respective missions in Afghanistan.

The Leopard II is slated to serve the German Bundeswehr around 2030. Regardless of what replaces it, the Leopard II has served with distinction. The Leopard’s website proudly states: “The Leopard 2A7 + was developed and qualified for the new tasks of the German Armed Forces. The system components, optimized to protect the crew, prove their worth.”